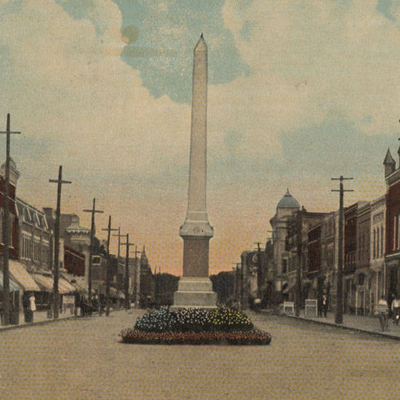 Governor Caswell Monument
Kinston
View complete article and references at Commemorative Landscapes of North Carolina at: https://docsouth.unc.edu/commland/monument/210
Description: The monument is a tall granite obelisk that rests atop a darker granite plinth, with the entire structure sitting on a three tier base. The monument has a history of accidental damage, removal, replacement, and relocation, with the image above showing the monument likely in its original location. The original monument consisted of a 16 foot high obelisk of Richmond granite which sat on a foundation of three bases. The top of the base was capped with Roman arches.
Images: Postcard image of the monument in front of the historic Hotel Tull, Kinston, N.C., most likely the 1908 replacement
Inscription:
Front:
Richard Caswell, / their first Governor / under a free Con- / stitution. / Called to / the head of af- / fairs in North Caro- / lina in the struggle with Great / Britain for Independence, he gave / himself up to the service of his country / without stint and without compensation.
Side: Born August 3d, 1729, / Died 10th of November, 1789; / An accomplished surveyor, and able / lawyer, a skillful financier, a successful / soldier, a profound statesman, a devoted / patriot and an honest man - the an- / nals of North Carolina for forty years attest his virtue, his /capacity and his services.
Side: Deputy Surveyor of the Colony, Member / of the Colonial Assembly, Colonel of / the Colonial Forces, Member of the / Provincial Congresses, Delegate to / the Continental Congress, Pub- / lic Treasurer, Colonel of the / Revolutionary Forces, Brig- / adier-General, President / of the Congress that / framed the first State / Constitution, four / times elected / Governor of / North Carolina, / Comptroller Gen- / eral, elected Delegate / to the Convention to / frame the Federal Constitution, Member of the / State Convention to ratify the / Federal Constitution.
Dedication date: July 1881
Materials & Techniques: Polished granite
Sponsor: State of North Carolina
Subject notes: Richard Caswell served as both the first and fifth governor of North Carolina. He was a surveyor and lawyer and served in the Continental Congress. He was president of the provincial congress that drafted North Carolina's first constitution in 1776, and he took the oath of office as the State's first governor in 1777.
The original monument was erected at the intersection of Queen and Caswell Streets in 1881. It was damaged by fire in 1895 and replaced in 1908. In 1929 the Daughters of the American Revolution erected an iron fence around the monument. And in 1934 the second monument was damaged in street paving and subsequently removed to the city landfill. Sections of the monument were subsequently recovered and reassembled, and today the monument sits in front of the Lenoir County Courthouse.
Location: The original monument sat at the intersection of Queen and Caswell Streets. Today the monument sits in front of the Lenoir County Courthouse in the 100 block of South Queen Street at the intersection with East King Street.
Former Locations: The monument originally sat at the intersection of Queen and Caswell Streets.
Landscape: The landscape of the original installation consisted of commercial buildings at the city center. In the monument's present location, it sits in the lawn to the right of the front of the Courthouse.
City: Kinston
County: Lenoir
Subjects: Historic Civic Figures,Historic Military Figures,Historic Political Figures,Removed Monuments,Revolutionary War
Latitude:
35.25901
Longitude:
-77.58098
Subjects:
Monuments
Places
Authors:
Commemorative Landscapes of North Carolina
Origin - location:
Lenoir County
Kinston
From:
Commemorative Landscapes of NC, University of North Carolina Chapel Hill.