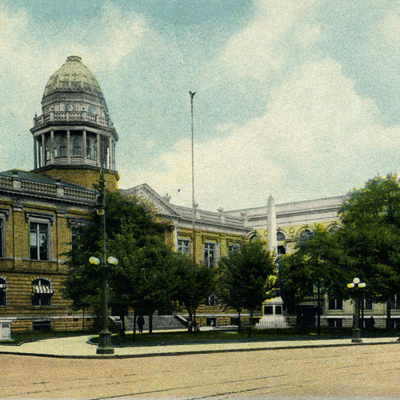 Description: Also known as the Mecklenburg Resolves Monument, this tall granite obelisk commemorates the signers of the Mecklenburg Declaration of Independence. The obelisk sits atop a two-tier plinth resting on four steps. Bronze plaques are set in the four sides of the bottom plinth, and a single plaque rests on the front face of the top plinth.

Nickname: The monument is also known as the Mecklenburg Resolves Monument and the Monument to the Signers of the First American Declaration of Independence.

Unveiling & Dedication: The monument was erected and dedicated for the 123rd anniversary of the Mecklenburg Declaration in 1898. A massive crowd assembled for the dedication event that included a parade, speeches, music, and a supper. Dr. Robert J. Brevard was the the chief marshall, and Confederate veterans received a place of honor in the parade, with a group of veterans lead by Julian S. Carr. The Gastonia Continental Guards dressed in period uniforms, along with the Daughters of the Regiment, and the Charlotte Drum Corps appeared wearing red jackets and white trousers. Speeches were delivered from the grounds of the First Presbyterian Church near the courthouse. Orations were delivered by the Hon. Adlai E. Stevenson, chief orator, General J. H. Lane, F. B. McDowell (president of the Monument Association), and J. P. Caldwell, among others. The Mecklenburg Declaration was read by Captain A. F. Brevard of Lincoln County, and the monument was unveiled by a number children who were descendents of Revolutionary War patriots.

Location: The monument is located in front of the historic Mecklenburg County Courthouse on East Trade Street. It faces roughly north.

Landscape: The monument sits in a paved stone plaza within the grounds of the courthouse. The plaza is surrounded by low manicured hedges, mature shade trees, and seasonal plantings.