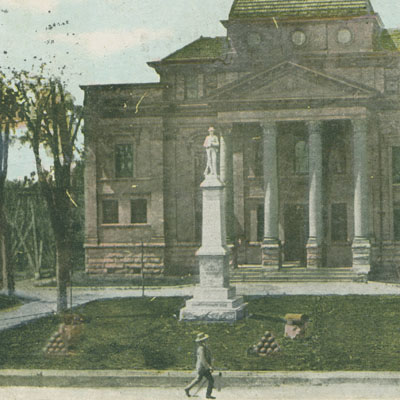 Description: The monument presents a Confederate soldier, at parade rest, atop a tall tapered granite column. Two cannon rest in the grass, one flanking each side of the monument and facing outward from the courthouse.


Right side: THEY BORE THE FLAG OF A / NATION'S TRUST / AND FELL IN A CAUSE, / THOUGHT LOST, STILL JUST, / AND DIED FOR ME AND YOU


Left side: DEFENDERS OF / STATE SOVEREIGNTY


Rear: FROM BETHEL TO APPOMATOX, / THEIR COURAGE, PATIENCE, / FORTITUDE, ENDURANCE, AND / UNSELFISH DEVOTION TO / COUNTRY ARE UNPARALLELED / IN HISTORY.

Unveiling & Dedication: According to the United Daughters of the Confederacy annual meeting minutes for 1906, the monument was unveiled with exercises on May 10, 1906.

Subject notes: According to the United Daughters of the Confederacy, twenty-eight soldiers who died during the war were buried in Statesville. In 2006, a Mr. Stan Clardy approached the Iredell County Commissioners with a request to place a re-dedication marker at the base of the monument as part of the celebration of its 100th anniversary in May of that year. The planned wording would be "Centennial and Rededication of Monument - In memory of the Iredell County Confederate Soldiers, May 6, 2006, Deo Vindice." The cost would be covered by private donations and sales of advertisements and commemorative items. The board approved the request, 5 votes to 0.

Location: The monument sits in front of the historic Iredell County Courthouse at Court Street and South Center Street in Statesville.

Landscape: The monument sits in the lawn in front of the courthouse. It is flanked by two cannon facing away from the courthouse, and mature trees surround the site.