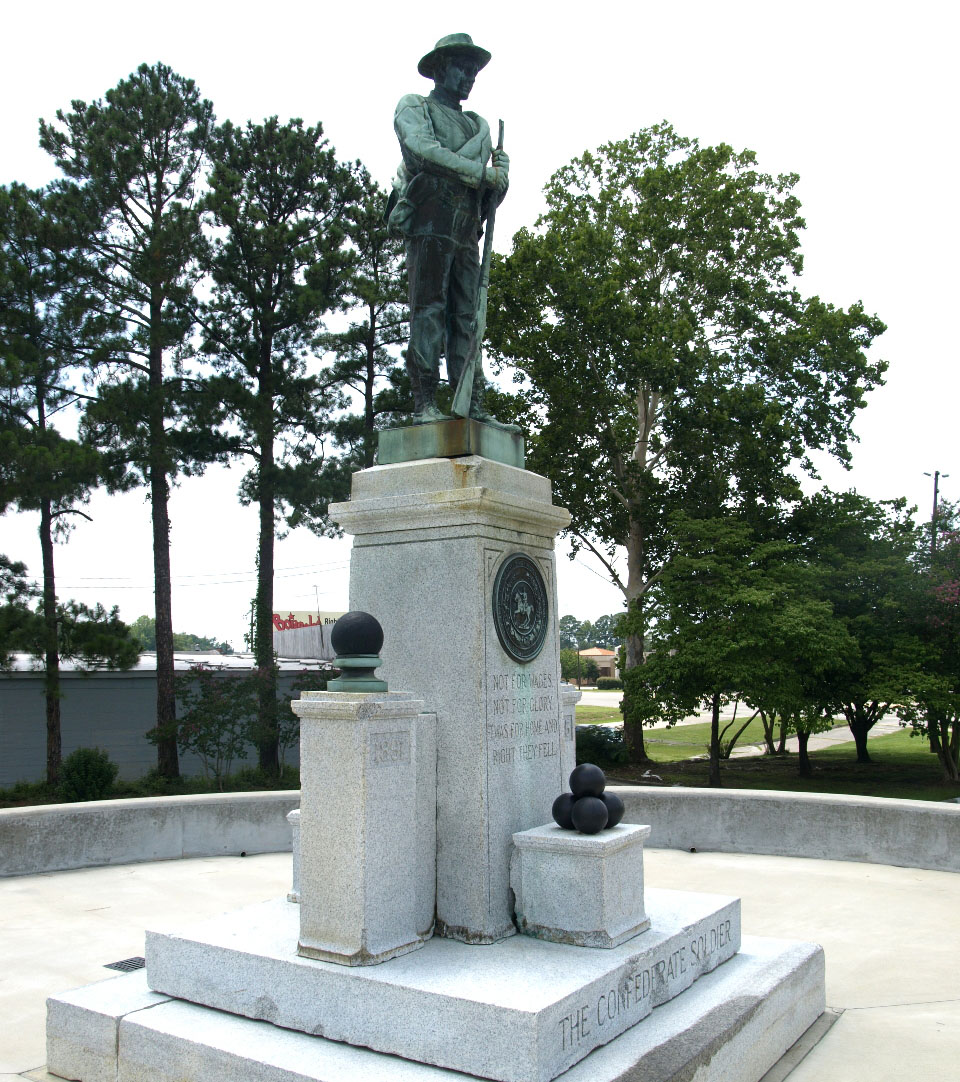 Lenoir County Confederate Soldiers Monument
Kinston
View complete article and references at Commemorative Landscapes of North Carolina at: https://docsouth.unc.edu/commland/monument/364
Description: This monument depicts the Confederate Common Soldier standing at parade rest. The bronze statue rests atop a tall, tapered granite plinth, with the entire structure approximately ten feet tall. The plinth has a round bronze medallion beneath the statue with the bas-relief image of horse and rider. Two small pillars each topped with a cannon ball are attached to either side of the plinth. A smaller granite plinth sits in front of the structure and has three small cannon balls placed atop. The entire structure sits on a two step granite base. The base beneath the monument reads "THE CONFEDERATE SOLDIER," in prominent uppercase letters.
Inscription:
Front, plinth: NOT FOR WAGES, / NOT FOR GLORY, / 'TWAS FOR HOME AND / RIGHT THEY FELL.
Front, pillars: 1861 [left] 1865 [right]
Front, base: THE CONFEDERATE SOLDIER
Rear, plinth: TO PERPETUATE THE / VALOR OF THE MEN / FROM LENOIR COUNTY / WHO WORE THE GREY / ERECTED MAY 10TH, 1924 / BY / A.M. WADDELL CHAPTER / U.D.C.
Dedication date: 5/10/1924
Materials & Techniques: Bronze, granite
Sponsor: A.M. Waddell Chapter, United Daughters of the Confederacy
Cost: $The cost of the monument was not made available to the public, according to the local Kinston newspaper.
Unveiling & Dedication: The dedication began with a service at the Queen Street Methodist Church with a prayer given by Dr. Abram Cory and then proceeded to the monument site on Queen Street. With a large crowd attending, the monument was unveiled by John A. Albertson and James Williams, both veterans of Company A of the 40th North Carolina Regiment of the Confederate States of America. Albertson was reported by the Kinston Daily Free Press to be 84 years old. The soldiers were assisted at the unveiling by two young girls, Payne Hatcher and Virginia Twyman. Governor Cameron Morrison gave the main address, and an address was given by Miss Junie Whitfield, a daughter of Confederate Colonel Nathan B. Whitfield and the president of the local chapter of the United Daughters of the Confederacy. She remarked on the fitting location of the monument as the place where the women and children of the town fled for safety during General Foster's advance. Mrs. Frank Harrold from Georgia was the guest of honor at the ceremonies as the President of the United Daughters of the Confederacy.
Following the dedication, the crowd proceeded to Maplewood Cemetery for decoration of graves and the cemetery's Confederate Monument. Dr. John Hartley of St. Mary's Episcopal Church gave a benediction, and "Taps" was played.
Subject notes: The Battle of Kinston was fought December 13 and 14, 1862. Confederate forces under General Nathan G. "Shank" Evans attempted to block the advance to Goldsboro of Union forces under General John G. Foster. The Confederate soldiers were squarely outnumbered by the Union army, with some 2,000 Confederates to more than 10,000 Union soldiers. Despite strong defenses by Evans's forces and their defense of the Neuse by burning the bridge at Kinston, the Union troops managed to advance and proceeded to vandalize and loot Kinston. The Confederates suffered 125 casualties and some 400 soldiers were taken prisoner. The monument was constructed in Georgia, according to the Kinston Daily Free Press. Kinston has two additional monuments commemorating Confederate soldiers and the Battle of Kinston: the Maplewood Cemetery Confederate Monument of 1880 and the Robert F. Hoke Monument of 1920.
Controversies: The monument has been moved several times over the years since its original unveiling. On July 1, 2020, it was moved to the First Battle of Kinston Civil War Battlefield Park on Harriette Drive in Kinston. This move was ostensibly in response to civil protest around the country and in North Carolina in the wake of the killing of George Floyd in Minneapolis by police on May 25 2020 and the growing anti-racist movements across the country.
Location: The monument sat in front of the Kinston-Lenoir County Visitor & Information Center on East New Bern Road. It faced generally north. On July 1, 2020, it was relocated to the First Battle of Kinston Civil War Battlefield Park.
Former Locations: The monument has had two prior locations. It was originally installed in the Vernon Heights area of Kinston at North Queen Street and Summit Avenue (then known as State Highway 12). This site was described by the Kinston Daily Free Press as the "highest ground east of Raleigh." It was later moved to the CSS Neuse/Governor Caswell State Historic Site until relocation to the site on New Bern Road.
Landscape: The monument sits in a circular cement plaza in front of the Visitor Center, with the road and trees in the background.
City: Kinston
County: Lenoir
Subjects: Civil War
Latitude:
35.244
Longitude:
-77.58474
Subjects:
Monuments
Places
Authors:
Commemorative Landscapes of North Carolina
Origin - location:
Lenoir County
Kinston
From:
Commemorative Landscapes of NC, University of North Carolina Chapel Hill.