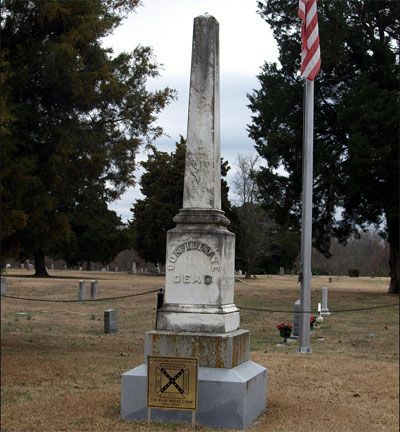 Description: This monument is a marble obelisk commemorating the unidentified or unknown Confederate dead from Lenoir County. The base of the obelisk is engraved on the front and right sides, with the front engraving in bas-relief. The engraving on the front face is original to the monument, with the text on the right side added at the time the monument site was restored in 1998. The monument rests on a two-tier granite base. A small metal sign sits in the ground in front of the monument to acknowledge the maintenance of the site by the Sons of Confederate Veterans, CSS Ram Neuse Camp No. 1427. A low chain fence surrounds the memorial site, and a flag pole flying the American Flag sits just outside the fenced area behind the monument.


Right: THIS MONUMENT / ERECTED 1892 / BY / UNITED DAUGHTERS OF / THE CONFEDERACY / FOR / 44 UNKNOWN SOLDIERS / KILLED IN BATTLE OF KINSTON / SITE RESTORED 1998 / BY / SONS OF CONFEDERATE VETERANS / FUNDED BY / KINSTON-LENOIR COUNTY / TOURISM DEVELOPMENT AUTHORITY

Dedication date: The North Carolina Chapter of the United Daughters of the Confederacy lists the date of dedication as 1880 (Curtis, 2011). The monument inscription added in 1998 indicates 1892.

Sponsor: According to the inscription added in 1998, the United Daughters of the Confederacy were the monument's original sponsor. The site was restored in 1998 by the Sons of Confederate Veterans with assistance from the Kinston-Lenoir Tourism Development Authority.

Post dedication use: The Confederate Monument at Maplewood Cemetery has been used as a place of prayer and remembrance since its dedication. The monument was also involved in the dedication of the Robert F. Hoke Monument when it was decorated as part of the unveiling ritual to remember the Confederate Dead.

Subject notes: The Battle of Kinston was fought December 13 and 14, 1862. Confederate forces under General Nathan G. "Shank" Evans attempted to block the advance to Goldsboro of Union forces under General John G. Foster. The Confederate soldiers were squarely outnumbered by the Union army, with some 2,000 Confederates to more than 10,000 Union soldiers. Despite strong defenses by Evans's Confederate forces and their defense of the Neuse by burning the bridge at Kinston, the Union troops managed to advance and loot Kinston. The Confederates suffered 125 casualties and some 400 soldiers were taken prisoner.

Location: The monument faces north in its location in Maplewood Cemetery. The cemetery is located between East Shine Street to the north and Lincoln Street to the south.

Landscape: The monument sits in the grass, surrounded by grave markers. The monument area is surrounded by a low chain fence with a flagpole flying the American Flag just outside the fence. Woods are visible behind the cemetery to the south.