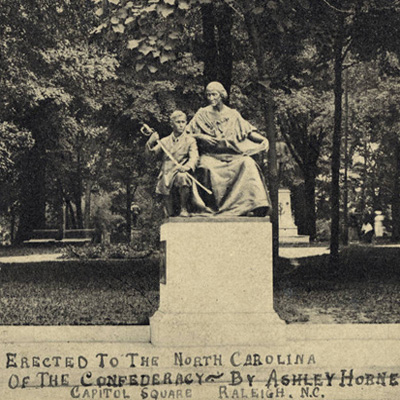 Monument to North Carolina Women of the Confederacy
Raleigh
View complete article and references at Commemorative Landscapes of North Carolina at: https://docsouth.unc.edu/commland/monument/99
Description: The seven foot tall monument, made possible through a private donation, honors the hardships and sacrifices of North Carolina women during the Civil War. A bronze sculpture depicts an older woman, a grandmotherly figure, holding a book as she sits next to a young boy holding a sword. It sits on top of a granite base with bronze bas-relief plaques. The woman, representing the women in the South as the custodians of history, imparts the history of the Civil War to the boy. The two relief plaques portray the Civil War; the eastern side shows soldiers departing for war and leaving their loved ones behind, while the western side depicts a weary or injured Confederate soldier returning home.

Inscription:
South face: TO THE /NORTH CAROLINA WOMEN / OF THE CONFEDERACY.

North face: PRESENTED TO /THE STATE OF NORTH CAROLINA /BY /ASHLEY HORNE / ERECTED 1914

Dedication date: June 10, 1914
Creator: Johnpaul Harris, Sculptor
Henry Bacon, Architect
Augustus Lukeman, Sculptor
Jno. Williams, Inc., Foundry
Materials & Techniques: Bronze sculpture and bas-reliefs, Mt. Airy granite base.
Sponsor: Colonel Ashley Horne
Cost: $10,000.00
Unveiling & Dedication: The monument was dedicated on June 10, 1914 with the acceptance address delivered by Governor Locke Craig. Governor Craig described the "epic" meaning of the monument's elements with its "themes of heroism and devotion" and the "inheritance of children of the South" from the sacrifice of their grandmothers to the swords of their fathers.
Subject notes: This monument was the first in North Carolina to honor the women of the Civil War era. After several failed attempts to erect a monument to Confederate women, due to insufficient fundraising and state appropriation, the monument was made possible by a donation from Colonel Ashley Horne, who died before it was unveiled. Horne paid for the monument after a series of legislative attempts failed to appropriate money for the construction of the monument. A brief post in the Confederate Veteran in 1912 indicated that the design created by sculptor Belle Kinney, originally of Nashville and then living in New York City, had been selected for the monument (Vol. 20, p. 9). Kinney's sculptural rendering of the women of the Confederacy placed in both Jackson, Mississippi (1917) and Nashville, Tennessee (1926) was very different depiction compared to the Raleigh monument. This may have been design of the original failed attempt to erect a monument.
An article in the June 12, 1912 issue of The News and Observer reported on details and progress of the monument. It reported on a recent article in the New York Herald indicating that the architectural component of the monument, to be created in the form of an exedra, was in the charge of Henry Bacon, the designer of the Lincoln Monument in the Nation's capital. The Lincoln monument construction was in progress from 1914 to 1922.
Controversies: Public outcry arose when a walkway was proposed near the Women of the Confederacy monument in August of 1913 by North Carolina Supreme Court Justice Walter Clark in front of the newly erected Supreme Court building. The proposal was eventually abandoned by the Board of Public Buildings and Grounds on account of the protests.
Location: Faces south.
City: Raleigh
County: Wake
Subjects: Civil War, Historic Women Figures
Latitude:
35.779720
Longitude:
-78.639650
Subjects:
Monuments
Places
Authors:
Commemorative Landscapes of North Carolina
Origin - location:
Wake County
Raleigh
From:
Commemorative Landscapes of NC, University of North Carolina Chapel Hill.