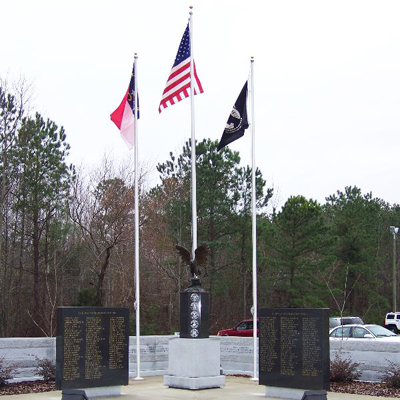 Moore County Veterans Memorial
Carthage
View complete article and references at Commemorative Landscapes of North Carolina at: https://docsouth.unc.edu/commland/monument/314
Description: This memorial consists of two black granite slabs, each 3,000 pounds, on which the names of almost 150 Moore County veterans killed in the past 100 years are inscribed beginning with World War I to the present. Behind the two black granite slabs sit two smaller gray granite slabs where the names of more than 1,000 additional veterans from Moore County are inscribed. Completing the monument, three flag poles surround the centerpiece, the sculpted figure of an eagle resting atop a smooth stone base. The black granite pedestal of the centerpiece is inscribed with the five branches of the military. The flags flown include the U.S. flag, the North Carolina flag, and the Prisoner of War flag. Twenty-one marble slabs flank the center on the left and right and bear the names of veterans living and deceased from Moore County. The monument forms a right angle, with the inscribed slabs extending to the left and right of the flag poles and eagle sculpture at the center. The memorial is intended to include the addition to the slabs of the names of future veterans as time goes on.
Images: Plaque by the flagpole | Right granite slab | Left granite slab
Inscription:
Flagpole plaque: MOORE COUNTY / VETERANS MEMORIAL COMMITTEE / RAYMOND DOBY - CHAIRMAN / RUBY H. HENDRICK - SEC./TRES. / JOANNE J. ATKINS / ROBERT D. COOKE / ANNIE PAGE / E. VERNON GARNER / GEORGE N. HUNT - VETERANS SERVICES OFFICER / CYNTHIA P. BREWER - ASST. VETERANS SERVICES OFFICER / CARLA JOHNSON - VETERANS SERVICES ASST. / DEDICATED NOVEMBER 11 , 2006
Dedication date: 11/11/2006
Creator: Quincy Edgerton, Clinton, N.C., Designer Clinton Marble & Monument Co., Foundry
Materials & Techniques: Black granite, grey granite, bronze
Sponsor: Town of Carthage, Moore County Veterans Memorial Committee
Cost: $71,543
Unveiling & Dedication: The Moore County Veterans Memorial was dedicated and unveiled on November 11, 2006. It was estimated that more than 1,000 people gathered at the memorial site at Carriage Oaks Complex in Carthage. Congressman Howard Coble unveiled the monument with Raymond Doby and Robert D. Cooke, who represented the Memorial Committee. The ceremony was extremely moving. Cheryl Gilmore sang the "National Anthem", and "Salute to the Armed Forces" was sung by the Sandhills Teen Challenge Choir. Veterans were asked to stand when their branch was sung. After the monument was unveiled, each name inscribed on the granite slabs was read individually followed by the toll of a bell to honor that veteran's sacrifice to his/her country. Four white doves were also released to symbolize freedom and peace. The ceremony was closed with the playing of "Taps" on a trumpet.
Post dedication use: Veterans' Day observance
Subject notes: The memorial is the inspiration of Raymond Doby, a veteran, who had a brother killed in action in Italy during World War I. Doby approached the Town of Carthage with the concept, and the town subsequently set aside the land where the memorial now stands. The Moore County Memorial was constructed to honor veterans from Moore County.
Controversies: Controversy began in 2012 around the possible construction of a fast food restaurant near the monument. The Pilot, Moore County's local newspaper, quoted veteran Ronnie Comer as he called the memorial "sacred ground" and commented that "I'm not against Bojangles', I'm against where it's going to be put. . .I don't want to be sitting there, thinking about my father, and hear 'Ã·May I take your order?' It's like putting a Bojangles' in the middle of a graveyard." As of early 2013, the issue remained unresolved.
Location: This Veterans Memorial is located near the intersection of NC Highway 24/27 and NC Highway 15-501 in Carthage. It sits near a shopping center in the Carriage Oaks Complex.
Landscape: The memorial sits in a grassy area with woods located nearby. A paved walkway connects the memorial with the nearby road.
City: Carthage
County: Moore
Subjects: Veterans of Multiple Wars
Latitude:
35.33959
Longitude:
-79.40118
Subjects:
Monuments
Places
Authors:
Commemorative Landscapes of North Carolina
Origin - location:
Moore County
Carthage
From:
Commemorative Landscapes of NC, University of North Carolina Chapel Hill.