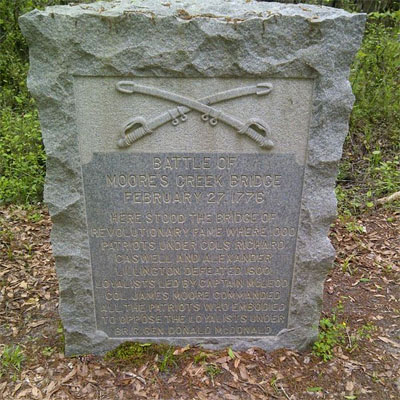 Moores Creek Bridge Monument
Moores Creek National Battlefield
View complete article and references at Commemorative Landscapes of North Carolina at: https://docsouth.unc.edu/commland/monument/309
Description: This 3' x 4' x 6" granite monument has a polished frame on the front face where the inscription appears below a pair of crossed sabers rendered in bas-relief.
Nickname: Old Bridge Monument
Inscription:
BATTLE OF / MOORE'S CREEK BRIDGE / FEBRUARY 27, 1776 / HERE STOOD THE BRIDGE OF / REVOLUTIONARY FAME WHERE 1000 / PATRIOTS UNDER COLS. RICHARD / CASWELL AND ALEXANDER / LILLINGTON DEFEATED 1600 / LOYALISTS LED BY CAPTIAN MCLEOD. / COL. JAMES MOORE COMMANDED / ALL THE PATRIOTS WHO EMBODIED / TO OPPOSE THE LOYALISTS UNDER / BRIG. GEN. DONALD MCDONALD.
Dedication date: 1931
Creator: Carolina Cut Stone Company, Wilmington, Unspecified
Materials & Techniques: Granite
Sponsor: The monument may have been purchased with federal funds.
Cost: $2000
Post dedication use: An annual ceremony is held in February with historic military demonstrations and reenactments.
Subject notes: During the period when Moores Creek battlefield transferred hands from the Moores Creek Battleground Association to the U.S. War Department, the new administration sought to move away from the previous emphasis on commemoration and focus on specifics of the actual battle. As a result, the Bridge Monument was erected as a part of the changing landscape on the battlefield, and the text was written by the Army War College.
Location: The monument is located near the historic road and beside the reconstructed bridge.
Former Locations: Originally positioned in front of the reconstructed bridge, the monument was moved and rotated in 1938 so the inscription would be read from the south instead of the east. By moving the monument off the historic road to the side, it no longer obstructed access to the bridge.
Landscape: The monument is tucked away on the battlefield near trees and shrubs beside the creek.
City: Currie
County: Pender
Subjects: Revolutionary War
Latitude:
34.45861
Longitude:
-78.11333
Subjects:
Monuments
Places
Authors:
Commemorative Landscapes of North Carolina
Origin - location:
Pender County
Currie
From:
Commemorative Landscapes of NC, University of North Carolina Chapel Hill.