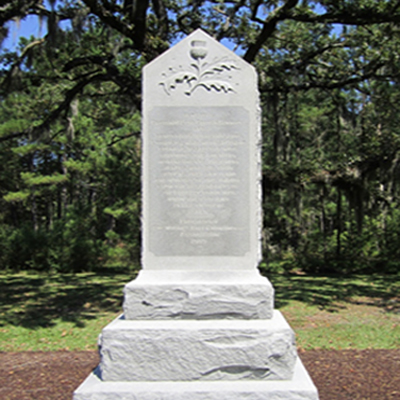 Moores Creek Loyalist Monument
Moores Creek National Battlefield
View complete article and references at Commemorative Landscapes of North Carolina at: https://docsouth.unc.edu/commland/monument/304
Description: The monument is a pointed column atop a base of three tiered steps. A polished frame in the column is inscribed and is crowned above the inscription with a bas-relief thistle. A national symbol of Scotland, the thistle references the Scottish Highlanders who fought alongside the Loyalists. The thistle also represents earthly sorrows, a symbol typically found in mourning imagery.
Images: Side | Rear
Nickname: Tory Monument
Inscription:
South face: HERE FELL / CAPTAIN MCLEOD, CAPTAIN CAMPBELL / AND / ABOUT FIFTY HIGHLAND SCOTS, / LOYALISTS; WHO, WITH SPLENDID / COURAGE, ASSUALTED WITH / CLAYMORES THE AMERICAN / INTRENCHMENTS. THEY WERE / HEROES WHO DID THEIR / DUTY AS THEY SAW IT AND / ARE WORTHY OF THIS TRIBUTE / FROM THE DESCENDANTS OF / THE EQUALLY BRAVE MEN / WHOM THEY FOUGHT. / PEACE TO THEIR / ASHES. / ERECTED BY / THE MOORE'S CREEK MONUMENTAL / ASSOCIATION / 1909.
Dedication date: 7/29/1909
Creator: Wilmington Stone and Granite Works, Unspecified
Materials & Techniques: Granite
Sponsor: Moores Creek Monument Association
Post dedication use: An annual ceremony of the Battle of Moores Creek is held in February with historic military demonstrations and reenactments.
Subject notes: General Donald MacDonald led 1,600 loyalists, many of whom were Scottish Highlanders, against the patriots in the battle of Moores Creek, fought near Wilmington on February 27, 1776. Over 30 loyalists were killed and 40 wounded.
Location: The monument is located on the north side of the walking trail, between the Patriot and Moore monuments which sit on the south side of the trail.
Former Locations: In 1974, the monument was moved 400 feet south from its original location near the woods.
Landscape: The monument is located under an oak tree and within a few hundred feet of the Moore and Patriot monuments located on either side.
City: Currie
County: Pender
Subjects: Revolutionary War
Latitude:
34.50666
Longitude:
-78.16333
Subjects:
Monuments
Places
Authors:
Commemorative Landscapes of North Carolina
Origin - location:
Pender County
Currie
From:
Commemorative Landscapes of NC, University of North Carolina Chapel Hill.