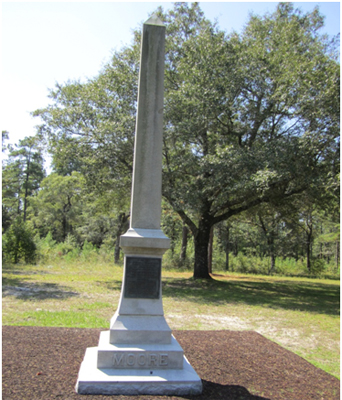 Moores Creek Moore Monument
Moores Creek National Battlefield
View complete article and references at Commemorative Landscapes of North Carolina at: https://docsouth.unc.edu/commland/monument/308
Description: This tall (13' x 4") granite obelisk serves to commemorate James Fulton Moore, the first president of the Moores Creek Monumental Association. A bronze plaque on the east face bears the inscription. Below the plaque on the base reads "Moore" in capital letters. On the reverse, James Fulton Moore's name is inscribed in a semicircle with his birth and death dates listed below. The choice of an obelisk for the monument reflects the cultural fascination with Ancient Egypt during the nineteenth century. Since its origins in Ancient Egypt, the obelisk has been seen as a symbol of reverence, dominance, and patriarchy.
Images: Inscription East Face | Inscription West Face
Nickname: James Moore Monument
Inscription:
East face: ON THIS FIELD / THE AMERICANS WON THEIR FIRST / DECISIVE VICTORY OVER / THE BRITISH ALLIES / AND THROUGH THE EFFORTS OF / HON. JAMES FULTON MOORE / FIRST PRESIDENT OF THE / MOORE'S CREEK BATTLE GROUND / ASSOCIATION / IT HAS BECOME A NATIONAL / RALLYING GROUND FOR LOYAL / REVOLUTIONARY DESCENDANTS / AND IN HIGH APPRECIATION OF / HIS SERVICES FOR 14 YEARS / THIS SHAFT IS ERECTED IN HIS MEMORY / MOORE
West face: JAMES FULTON MOORE / FEB. 14, 1852 / JULY 11, 1912
Dedication date: 1913
Creator: Wilmington Stone and Granite Works, Unspecified
Materials & Techniques: Granite shaft, bronze plaque, concrete base (on original, but which has since been removed)
Sponsor: Moores Creek Monumental Association
Subject notes: The monument commemorates the efforts of the Moores Creek Monumental Association's first president, James F. Moore. And according to the Gertrude Carraway scrapbook, the vote by the Association to erect the monument was unanimous. In August 1944, high winds damaged a part of the monument's shaft and broke off a portion of the base. It was repaired by Carolina Cut Stone Company on January 29, 1945.
Location: The monument sits in an open field outside the earthworks and beside the walking trail, approximately 200 feet away from the Loyalist and Patriot monuments.
City: Currie
County: Pender
Subjects: Historic Civic Figures,Revolutionary War
Latitude:
34.50583
Longitude:
-78.16333
Subjects:
Monuments
Places
Authors:
Commemorative Landscapes of North Carolina
Origin - location:
Pender County
Currie
From:
Commemorative Landscapes of NC, University of North Carolina Chapel Hill.