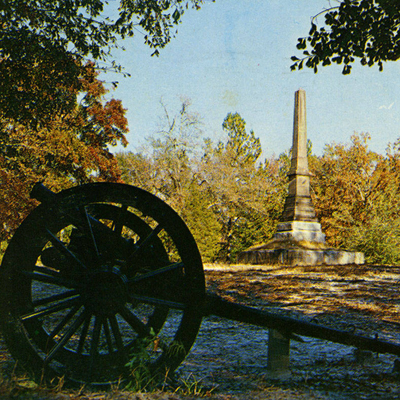 Moores Creek Patriot Monument
Moores Creek National Battlefield
View complete article and references at Commemorative Landscapes of North Carolina at: https://docsouth.unc.edu/commland/monument/306
Description: This 18" tall and 52" square brown sandstone obelisk was the first monument erected on the site. The choice of an obelisk for the monument reflects the cultural fascination with Ancient Egypt during the nineteenth century. Since its origins in Ancient Egypt, the obelisk has been seen as a symbol of reverence, dominance, and patriarchy. This obelisk is more ornate than the Moore Monument with six graduating squares, an ornate, floral dentil course underneath a small imposed pediment in the middle of the monument, and a band of a bundle of rods (fasces), which signify power and authority. Inscriptions of Caswell and Lillington on the east and west faces of the monument commemorate the colonels who led the patriots into battle.
Over the years the monument has undergone significant additions and alterations, including two granite bases in 1906.
Images: South Face | East Face | West Full View | West Face | North Face
Nickname: Grady Monument
Inscription:
South face: HERE LIE THE REMAINS OF / PRIVATE JOHN GRADY, / OF DUPLIN COUNTY, / WHO FELL BRAVELY FIGHTING FOR HIS / COUNTRTHE FIRST MARTYR IN / THE CAUSE OF FREEDOM IN NORTH / CAROLINA, AND THE ONLY WHIG / KILLED IN THIS BATTLE.
East face: CASWELL
West face: LILLINGTON
North face: IN COMMEMORATION / OF THE BATTLE OF / MOORES CREEK BRIDGE, / FOUGHT HERE / 27TH FEBRUARY, 1776. / THE FIRST VICTORY GAINED / BY THE AMERICAN ARMS / IN THE WAR OF THE / REVOLUTION.
Dedication date: February 27, 1857
Creator: Wilmington Stone and Granite Works, Unspecified
Materials & Techniques: Sandstone, granite, brick
Sponsor: Moores Creek Monumental Association
Cost: $5,000
Unveiling & Dedication: Speaker Joshua G. Wright, a Wilmington lawyer, delivered the address recounting the details of the patriot victory to approximately 1,500-4,000 people in attendance. After the dedication speech, Dr. F.J. Hill, a relation of Colonel James Moore, deposited the box of Grady's remains, sealed up the stone, and Rev. Mr. Grier read a benediction. The ceremony concluded with a military salute.
Post dedication use: An annual ceremony of the battle of Moores Creek is held in February and includes historic military demonstrations and reenactments.
Subject notes: The Battle of Moores Creek was fought on February 27, 1776. The monument commemorates the victory and honors the only patriot who died during the battle, Private John Grady of Duplin County. During the dedication ceremony in 1857, the cornerstone for the obelisk was laid into a brick foundation, which contained the reinterred remains of Grady. Sometime during 1857, the obelisk, imported from Philadelphia, was placed on top of the cornerstone and brick foundation.
Location: The monument is located in close proximity to the Loyalist and Moore monuments and is on the south side of the walking trail.
Former Locations: The Patriot Monument was moved on October 7, 1974 in preparation for the 1976 bicentennial celebrations and to improve the quality of the park experience.
Landscape: The monument sits on top of a slight hill in a clearing beside a forested area.
City: Currie
County: Pender
Subjects: Revolutionary War
Latitude:
34.50666
Longitude:
-78.16333
Subjects:
Monuments
Places
Authors:
Commemorative Landscapes of North Carolina
Origin - location:
Pender County
Currie
From:
Commemorative Landscapes of NC, University of North Carolina Chapel Hill.