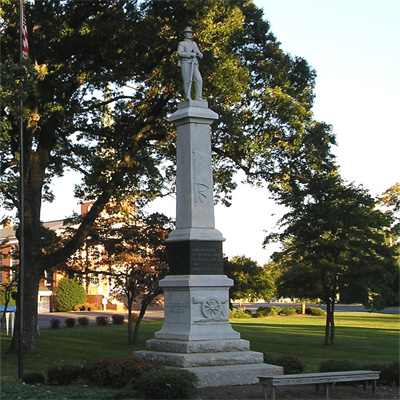 Description: The monument stands in front of Mt. Zion United Methodist Church where local men enlisted for the Confederate war effort and commemorates the local Confederate dead. It is composed of a Confederate Common Soldier statue atop a tall tapered column. The soldier stands at parade rest, facing north with his rifle resting on the ground. The column is mounted on a dark, polished square granite block that is inscribed on the front face. This structure rests atop a capped granite plinth which has a bas-relief image of a cannon on the front face, bas-relief inscriptions on the sides, and the bas-relief image of crossed swords on the rear face. The entire monument structure sits on three-step base of rough cut stone.

Inscription:
Front, dark granite: THOUGH MEN DESERVE / THEY MAY NOT WIN SUCCESS /
THE BRAVE WILL HONOR THE BRAVE / VANQUISHED NONE THE LESS.

Materials & Techniques: The base and column are constructed of granite. The statue may be of granite or a metal casting.

Sponsor: According to a history of the Mt. Zion Methodist Church, funds were raised through individual donations, oyster suppers, fiddlers' conventions, and shows with box suppers, and a list of donors was kept by a Mrs. R. J. Stough.

Unveiling & Dedication: The monument may have been erected in 1909 with the dedication ceremony in 1910. The monument was unveiled and dedicated on either August 4th or 6th, 1910 with reportedly 6,000 in attendance. A little girl, Miss Feriba Stough, unveiled the monument, and a dedication address was given by Congressman E. Y. Webb. An additional address was written by Judge Armistead Burwell, Associate Justice of the North Carolina Supreme Court.

Post dedication use: The church served as a site for Confederate reunions and services honoring veterans.

Subject notes: According to a brief history of the Mt. Zion Church prepared for its 150th anniversary, the church served as place for fathers and sons to enlist in two regiments of the Confederate Army (Company K, 56th regiment; and Company C, 1st Calvary Regiment of North Carolina Troops) and to join in the "Southern Cause." Beginning on May 30, 1861, the church held daily prayers for aid. According to the church history, forty-five Confederate soldiers were buried in the church cemetery. The church served as a site of Confederate solider reunions until 1949, and over the years as the numbers of veterans to honor decreased, annual services began to honor veterans of the Spanish-American War, World War I, and World War II.

Location: The monument sits facing north in the grounds of the Mt. Zion Methodist Church on the east side of Zion Avenue. It is located to the right of the northern entrance to the parking lot and grounds.

Landscape: The monument is located in the lawn steps away from a short stretch of sidewalk at the entrance from the road. It is surrounded by mature shade trees.