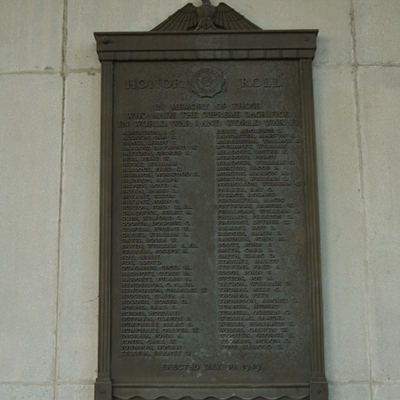 Description: This bronze plaque, approximately four feet by three feet, sits on the exterior wall at the entrance to the Onslow County Courthouse. It honors the sacrifice of soldiers who lost their lives in World War I and World War II. In the form of a tabernacle frame with simple classical details, the top ornament is a large bronze eagle perched on its outspread wings. Above the inscription, the plaque bears a bas-relief of the seal of the American Legion.

Location: The plaque is located on the exterior wall of the Onslow County Courthouse building a few feet to the right of the front doors. The entrance to the courthouse faces south, and the building is located on the north side of Old Bridge Street at the intersection with Court Street.

Landscape: The plaque is located on the building exterior and shaded by a porch at the entrance. The Onslow County Confederate Soldiers Monument sits just a few feet away in the center of the walkway in front of the building.