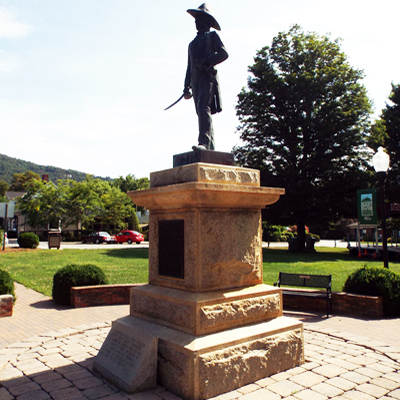 Otway Burns Statue
Burnsville
View complete article and references at Commemorative Landscapes of North Carolina at: https://docsouth.unc.edu/commland/monument/251
Description: A full-length copper statue of Otway Burns stands atop a granite plinth. Burns is clad in formal naval dress, likely representing his involvement in the War of 1812. He is shown in a posture suggesting both action and composure, with his left leg stepping forward and his left arm held bent at his side. At the time of dedication, the sculpture depicted Burns with a sword and scabbard in his right hand and a bugle in his left hand. The statue was damaged and defaced on a number of occasions resulting in the separation of these elements from the statue.
Photograph of Otway Burns Statue, made circa 1900-1915, in the collections of the North Carolina Museum of History, North Carolina Department of Cultural Resources.
Images: Inscription
Inscription:
OTWAY BURNS, / BORN IN ONSLOW COUNTY / N.C. 1775. / DIED AT PORTSMOUTH / N.C. 1850. / SAILOR - SOLDIER - / STATESMAN. / NORTH CAROLINA'S FOREMOST SON / IN THE WAR OF 1812-15. / FOR HIM, THIS TOWN IS NAMED. / HE GUARDED WELL OUR SEAS, / LET OUR MOUNTAINS HONOR HIM.
Dedication date: 4/5/1909
Creator: W. H. Mullins Company, Foundry Daniel Boone, VI, Foundry
Materials & Techniques: Copper, Mount Airy granite
Sponsor: Walter Francis Burns, Sr., grandson of Otway Burns, gifted the statue to the county in 1909.
Unveiling & Dedication: Walter Clark, Chief Justice of the North Carolina Supreme Court, provided the dedicatory address. The unveiling ceremony was attended by a number of Otway Burns' decendents.
Post dedication use: Shortly after the Second World War, the United States Navy presented the town of Burnsville with the ship's bell from the destroyer USS Burns, also named after the Privateer. The bell was for a short time displayed alongside the statue. Today, the town square in which the monument stands is frequently used for community activities, including craft fairs and seasonal stargazing gatherings.
Subject notes: A native of Onslow county, Captain Otway Burns was one of North Carolina's greatest naval heroes in the War of 1812. As a Privateer, he plundered British ships across the Atlantic coast with his schooner, the Snap Dragon. After the war, Burns became an entrepreneur and politician, serving in the North Carolina General Assembly. He lost favor with the eastern counties of the state when he voted to increase representation for the western counties. Burns is still honored in the western portion of the state by the town of Burnsville, named after him. Later in his life, Burns was appointed keeper of the Brant Shoals Light House by President Andrew Jackson.
The statue was given by his grandson, Walter Francis Burns, Sr. Otway Burns was buried in Beaufort, N.C.
The statue was damaged or defaced on a number of occasions, resulting in damage and separation of the sword and bugle. In the 1960s, the Burnsville Garden Club organized restoration of the statue. Daniel Boone, VI, a local smith, crafted a new sword and scabbard and bugle.
Location: The statue sits in the town square in the center of the Main Street traffic circle.
Landscape: The statue sits in the center of the square, in the middle of a circular brick walkway. A lawn with plantings and small shrubs surrounds the walkway.
City: Burnsville
County: Yancey
Subjects: Historic Civic Figures,Historic Political Figures,War of 1812
Latitude:
35.91721
Longitude:
-82.29966
Subjects:
Monuments
Places
Authors:
Commemorative Landscapes of North Carolina
Origin - location:
Yancey County
Burnsville
From:
Commemorative Landscapes of NC, University of North Carolina Chapel Hill.