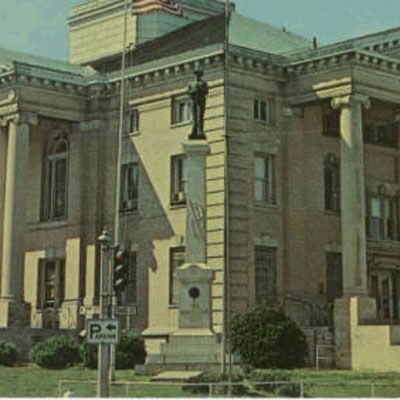 Pitt County Confederate Soldiers Monument
Greenville [Removed]
View complete article and references at Commemorative Landscapes of North Carolina at: https://docsouth.unc.edu/commland/monument/382
Description: This monument presents a Common soldier statue situated atop a tall tapered column. The soldier stands with his arms crossed as they rest atop the muzzle of his rifle with the butt resting on the ground in front of him. He wears a Confederate uniform with a wide brimmed hat.
The column bears a bas-relief image of a Confederate flag unfurled around its pole. The plinth contains a medallion above the inscription, and the initials of the Confederate States of America are engraved on the cap above.
Vintage postcard image, circa 1915-1930
Inscription:
Front: OUR CONFEDERATE DEAD
Right: TO THE HEROES OF 1861-1865
Left: ERECTED BY THE PEOPLE OF PITT COUNTY IN GRATEFUL / REMEMBRANCE OF THE COURAGE & FORTITUDE OF HER CONFEDERATE / SOLDIERS
Rear: DEDICATED 1914
Dedication date: 11/13/1914
Creator: W. H. Mullins Company, Foundry
Materials & Techniques: Bronze, granite
Sponsor: A reference in the United Daughters of the Confederacy, North Carolina Division, annual meeting minutes from 1910 indicates the George B. Singletary Chapter No. 313 at Greenville was organizing that year for laying of the cornerstone of the monument. The monument itself indicates sponsorship by the citizens of Pitt County.
Unveiling & Dedication: The monument was dedicated on November 13, 1914, and the address was given by Governor Locke Craig.
Subject notes: During the days of July 19 to 23, 1863, Greenville was raided as part of the Union effort under General Edward Potter to disable the rail routes in the eastern part of the state along with the cotton mills at Rocky Mount. Potter's advance through New Bern, Kinston, Greenville, Rocky Mount, and Tarboro has become known as Potter's Raid. Potter and his troops entered Greenville on Sunday the 19th without being met by Confederate troops. Locals reported widespread looting by the Union soldiers following the departure of the troops late in the afternoon.
Controversies: The Pitt County monument has been the subject of calls for removal since 2006. A group of citizens petitioned county commissioners requesting removal of the statue from its installation on public property. On Monday, June 15, 2020 the Pitt County Board of Commissioners voted 7-2 to remove and relocate the monument. This decision came ostensibly in the wake of civil protest around the country and state following the death of George Floy in Minneapolis in May 2020 by police. The monument was removed on June 22 and June 23, 2020 and relocated to storage. Board of Commissioners Chairman Melvin McLawhorn indicated that the board would make a decision where to relocate the monument in accordance with state law. And officials suggested that removal, storage, and relocation might cost upwards of $100,000.
Location: The monument sat on the right side of the courthouse grounds at the corner of West 3rd and South Evans Streets. It faces south.
Landscape: The monument sat in the lawn between a walkway connecting the south and east entrances to the courthouse and the sidewalk along West 3rd and South Evans Streets. Mature trees are located on the edge of the lawn area as they flanked the monument.
City: Greenville
County: Pitt
Subjects: Civil War
Latitude:
35.61337
Longitude:
-77.37265
Subjects:
Monuments
Places
Authors:
Commemorative Landscapes of North Carolina
Origin - location:
Pitt County
Greenville
From:
Commemorative Landscapes of NC, University of North Carolina Chapel Hill.

The Pitt County Commissioners (7 of 9) and the Pitt County Manager VIOLATED North Carolina General Statute G.S. 100-2.1 "Protection of monuments, memorials, and works of art." Their CRIMINAL actions are up to this time, unprosecuted. Our monument, which stood from 1914 until it's ILLEGAL REMOVAL in 2020, was inscribed "Our Confederate Dead." It stood to honor the fearless and dedicated men who gave their lives defending their county and their state from annihilation by the union raiders sent by Abraham Lincoln. Our monument did not promote war and it certainly did not promote slavery. And contrary to an earlier comment on this page; it's purpose was not to INTIMIDATE but to COMMEMORATE.
Deo Vindice

They were traitors who died

They were traitors who died defending slavery. Get your Lost Cause nonsense out of here.

Why are these "Confederate"

Why are these "Confederate" statue called that? These statures were erected during the "Jim Crow" era? They were erected to intimidate Negros when the Klan were riding through and burning homes and lynching people.

Referring to them as Confederate Monuments because they represent the past during the Civil War. The Pitt County statue for example represents a common confederate soldier.