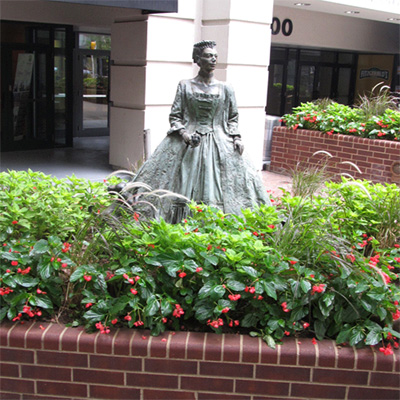 Queen Charlotte Walks in Her Garden
Charlotte
View complete article and references at Commemorative Landscapes of North Carolina at: https://docsouth.unc.edu/commland/monument/342

Description: The life-size bronze sculpture of Queen Charlotte stands in a garden along with sculptures of two of her dogs. She is depicted wearing a long-sleeved gown with petticoat and train and holds a small bouquet of flowers in her right hand. On her right wrist she wears a bracelet with a cameo of her husband, King George III of England. One dog playfully jumps at the hem of her dress and the other stands amidst the plantings staring back at her with a look of devotion. An inscribed plaque is set in the brick walkway beneath the raised garden bed.

Inscription:
QUEEN CHARLOTTE WALKS IN HER GARDEN / GRAHAM WEATHERS / SCULPTOR AMERICAN 1988 / IN 1761, COLONIAL AMERICANS WERE FASCINATED BY THE ROYAL / WEDDING OF ENGLANDS KING GEORGE III TO A 17 YEAR-OLD GERMAN / PRINCESS. CHARLOTTE SOPHIA OF THE DUCHY OF MECKLENBBURG-STRELITZ / SETTLERS HERE WERE REBELLIOUS TOWARD THE KING AND HIS AGENTS BUT / NAMED THEIR TOWN AND COUNTY IN HER HONOR, IN HOPES OF GAINING / ROYAL FAVOR. / SHE WAS A SMALL WOMAN "EASY, GENTEEL, AND AGREEABLE," WHO / BORE 15 CHILDREN, PLAYED THE HARPSICHORD, LEARNED BOTANY, AND / TOOK PLEASURE IN KEW AND RICHMOND GARDENS. HER DOGS, ONE NAMED / PRESTO, FOLLOWED HER ON DAILY WALKS. HER APPEARANCE AND / INFORMAL APPAREL ARE MODELED AFTER PORTRAITS IN ENGLISH MUSEUMS. / KING GEORGE III, PLAGUED BY RECURRING ILLNESS, CALLED HER / "MY PHYSICIAN MY FRIEND" SHE IS REMEMBERED AS A GREAT BENEFACTOR / OF HOSPITALS. QUEEN CHARLOTTE WAS THE GRANDMOTHER OF QUEEN VICTORIA. / "SHE IS FULL OF SENSE AND GRACIOUSNESS. MINGLED WITH DELICACY OF / MIND AND LIVELINESS OF TEMPER" / FANNY BURNEY, COURT ATTENDANT AND NOVELIST OF THE PERIOD. / "A MOST AGREEABLE COUNTENANCE, VASTLY GENTEEL, WITH AN AIR / NOT WITHSTANDING HER BEING A LITTLE WOMAN. TRULY MAJESTIC." / A NOBLEWOMAN REPORTS THE QUEEN'S CORONATION, 1761

Subject notes: Queen Charlotte, also known as Charlotte of Mecklenburg, was the queen consort of King George III of Great Britain, and is the namesake of the largest North Carolina city, Charlotte, and Mecklenburg County where the city is located. She studied botany and was a patron of the arts.

Location: The sculpture sits in front of the entrance to the World Trade Center on North College Street at the corner of East 5th Street in Charlotte. It faces the street.