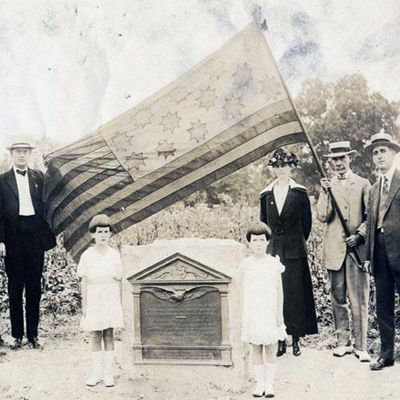 Description: This monument is a memorial plaque mounted on stone erected near the presumed location of Richard Caswell's grave. The plaque sits on the stone slab, approximately three feet high, and is made of metal, likely bronze. The plaque is a neo-classical frame in the design of a Roman temple with bas-relief images of classical figures under the gable of the frame's roof. The inscription is framed at the top and below the gable by the bas-relief image of an eagle with its wings outstretched and on the sides by columns.


This monument is in the same style used at another Kinston site to commemorate Robert F. Hoke, a Civil War general who lead his regiment against the Union Army at Kinston. The Robert Hoke Memorial was dedicated several months later in 1920.

Inscription:
Front: SOUTH OF THIS MARKER, 166 YARDS, IS THE GRAVE / OF RICHARD CASWELL, THE FIRST GOVERNOR OF / NORTH CAROLINA AS AN INDEPENDENT STATE /
"I WILL MOST CHEERFULLY JOIN ANY OF MY / COUNTRYMEN, EVEN AS A RANK AND FILE MAN, / AND WHILST I HAVE BLOOD IN MY VEINS FREELY / OFFER IT IN SUPPORT OF THE LIBERTIES OF MY COUNTRY." / (CASWELL TO HIS SON IN 1775) /
ERECTED 1919 BY / THE NORTH CAROLINA HISTORICAL COMMISSION, / CITIZENS OF LENOIR COUNTY AND CASWELL-NASH CHAPTER, D.A.R.

Cost: $The monument was funded by $100 provided by the donations of citizens and $100 appropriated by the North Carolina Historical Commission.

Unveiling & Dedication: The monument was unveiled on Monday September 1, 1919 beginning at 10:30 a.m. with a patriotic song. The Reverend Charles Read from the Queen Street Methodist Church began the ceremony with an invocation, and the Honorable H. E. Stacy gave the keynote speech. The day was a holiday for county officials and citizens to commemorate one of Lenoir County's most well-known and revered statesmen.

Subject notes: Richard Caswell served as both the first and fifth governor of North Carolina. He was a surveyor and lawyer and served in the Continental Congress. President of the provincial congress that drafted North Carolina's first constitution in 1776, he took the oath of office as the State's first governor in 1777.

Controversies: There has been debate about the exact location of Caswell's grave and its proximity to the marker. No proof could be provided until 2008 when Dr. Charles Ewan, Professor of Anthropology at East Carolina University, performed an excavation that provided relatively strong evidence that Caswell is buried where the marker indicates. However, no definitive proof has been established.

Location: The marker is located on West Vernon Avenue near the entrance to the CSS Neuse and Governor Caswell Memorial historic site.

Landscape: The marker is located about six feet from the road. It is surrounded by mature shade trees and grass.