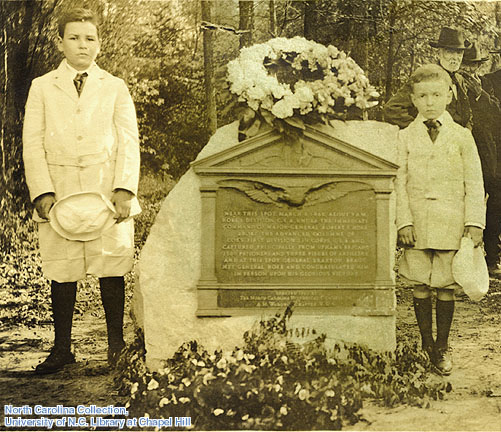 Robert Hoke Monument
Kinston
View complete article and references at Commemorative Landscapes of North Carolina at: https://docsouth.unc.edu/commland/monument/362
Description: This monument is a memorial plaque dedicated to the memory of General Robert Hoke and the battle he won on March 8, 1865 at Southwest Creek (also known as the Battle of Wyse Fork) against General Cox's Union Army. The plaque sits on an irregular stone slab, approximately three feet high, and is made of metal, possibly bronze. The design of the plaque is neo-classical, representing a Roman temple with bas-relief images of classical figures and framed by elegant columns. The inscription on the plaque is framed at the top by the bas-relief image of an eagle with its wings outstretched. In 1995 the monument was relocated just to the south of its original location, and a bronze plaque on a small square slab of granite commemorating the relocation was added at that time in the ground at the foot of the monument.
This monument is in the same style used to commemorate the grave of Richard Caswell, North Carolina's first and fifth governor, which is also located in Kinston. The Caswell grave marker was dedicated eight months earlier in September 1919.
Inscription:
Marker, plaque: NEAR THIS SPOT, MARCH 8, 1865, ABOUT 9 A.M. / HOKE'S DIVISION, C.S.A. UNDER THE IMMEDIATE / COMMAND OF MAJOR-GENERAL ROBERT E. HOKE, BROKE THE ADVANCE COLUMNS OF / COX'S FIRST DIVISION, 23RD CORPS, U.S.A. AND / CAPTURED PRINCIPALLY FROM UPHAM'S BRIGADE / 1500 PRISONERS AND THREE PIECES OF ARTILLERY / AND AT THIS SPOT GENERAL BRAXTON BRAGG / MET GENERAL HOKE AND CONGRATULATED HIM IN / PERSON UPON HIS GLORIOUS VICTORY.
Ground, plaque: THE "HOKE MONUMENT" / RELOCATED MARCH 12 1994 FROM ORIGINAL SITE / (.6 MILES WEST) BY C.S.S. RAM NEUSE CAMP / "SONS OF CONFEDERATE VETERANS" / "REDEDICATED MAY 20 1995"
Dedication date: The original monument was dedicated on May 10, 1920. It was rededicated at its relocation on May 20, 1995.
Materials & Techniques: Granite and metal
Sponsor: A. M. Waddell Chapter of the United Daughters of the Confederacy, the C.S.S. Neuse Camp Sons of Confederate Veterans, and the North Carolina Historical Commission
Unveiling & Dedication: The original unveiling, on the battlefield site, occurred on Confederate Memorial Day in 1920 following general memorial services to the Confederate dead. The Hoke Memorial dedication included an address by Colonel J. Bryan Grimes, the secretary of State of North Carolina. The A.M. Waddell Chapter of the United Daughters of the Confederacy hosted an elaborate dinner, followed by a night service at Maplewood Cemetery with prayers, decoration of the Confederate monument there, and a speech by state senator George V. Cowper. Four generals associated with the battle were in attendance, and a flag used in the battle was on display. The monument was unveiled by General Hoke's grandsons, Robert Hoke Webb and Robert Hoke Pollock.
Subject notes: General Robert F. Hoke was a Major General in the Confederate army in control of "Hoke's Division" in North Carolina and Southern Virginia. His command led to great successes such as the victory in the Battle of Cold Harbor in Virginia which stopped Union advances and the Battle of Southwest Creek (also known as the Battle of Wyse Fork), considered the Confederacy's last significant victory. He was then forced to surrender on May 1, 1865 at Bennett Place near Durham, North Carolina. General Hoke was born in Lincolnton, North Carolina on May 27, 1837.
In the image shown above, the two young boys flanking the monument are Robert Hoke Webb and Robert Hoke Pollock, grandsons of General Hoke.
Kinston has two additional monuments commemorating Confederate soldiers and the Battle of Kinston: the Maplewood Cemetery Confederate Monument of 1880 and the Lenoir County Confederate Soldiers Monument of 1924.
Location: The monument sits on the south side of British Road at the intersection with North Carolina Highway 70. It faces generally west.
Former Locations: The monument was originally located on the battlefield site, subsequently the site of the Armenia Christian Church, on the west side of North Carolina Highway 70 and approximately .6 miles to the north of the monument's present location. The original location is reportedly in the vicinity of where General Braxton Bragg met General Hoke to congratulate him on his victory.
Landscape: The monument sits in a grassy area next to a small gravel parking area. A low white fence and wooded area are behind the monument. The plot is also shared by a marker for the Battle of Wyse Fork.
City: Kinston
County: Lenoir
Subjects: Civil War
Latitude:
35.22411
Longitude:
-77.5297
Subjects:
Monuments
Places
Authors:
Commemorative Landscapes of North Carolina
Origin - location:
Lenoir County
Kinston
From:
Commemorative Landscapes of NC, University of North Carolina Chapel Hill.