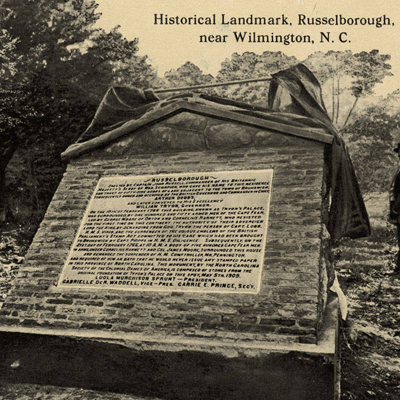 Description: The Russelborough marker commemorates the location of the historic Russelborough home, residence of colonial governors Arthur Dobbs and William Tryon, prior to Tryon's move of the colonial seat to New Bern. The memorial is reportedly constructed of brick and stone obtained from the archeological remains of the Russelborough site. The marker, approximately five feet tall at the highest point, is constructed in the shape of a building with a roof at the top and the entire structure placed at an upward angle. The marker has an inlaid marble tablet which bears the inscription.

Inscription:
RUSSELBOROUGH / ERECTED BY CAPTAIN JOHN RUSSELL, COMMANDER OF HIS BRITANNIC / MAJESTY'S SLOOP OF WAR SCORPION, WHO GAVE HIS NAME TO THIS RESIDENCE / AND TRACT OF FIFTY-FIVE ACRES OF LAND ADJACENT TO THE TOWN OF BRUNSWICK. / SUBSEQUENTLY OWNED AND OCCUPIED BY THE BRITISH GOVERNOR AND COMMANDER IN CHIEF, / ARTHUR DOBBS, / AND LATER TO HIS EXCELLENCY / WILLIAM TRYON, GOVERNOR. / ON THE 10TH OF FEBRUARY 1766, THIS BUILDING, KNOWN AS TRYON'S PALACE, / WAS SURROUNDED BY ONE HUNDRED AND FIFTY ARMED MEN OF THE CAPE FEAR, / LED BY GEORGE MOORE OF ORTON AND CORNELIUS HARNETT, / WHO RESISTED FOR THE FIRST TIME ON THIS CONTINENT THE AUTHORITY OF THEIR SOVEREIGN / LORD THE KING, BY DEMANDING FROM GOV. TRYON THE PERSON OF CAPT. LOBB, / H.M.S. VIPER, AND THE SURRENDER OF THE ODIOUS EMBLEMS OF THE BRITISH / PARLIAMENT'S STAMP ACT COMMITTED TO HIS CARE WHICH HAD BEEN BROUGHT / TO BRUNSWICK BY CAPT. PHIPPS IN H.M.S. DILIGENCE. SUBSEQUENTLY, ON THE / 21ST DAY OF FEBRUARY 1766, AT 10 A.M. A BODY OF FIVE HUNDRED CAPE FEAR MEN, / IN ARMS, UNDER CORNELIUS HARNETT AND COL. JAMES MOORE, SURROUNDED THIS HOUSE / AND DEMANDED THE SURRENDER OF H.M. COMPTROLLER, MR. PENNINGTON, / AND REQUIRED OF HIM AN OATH THAT HE WOULD NEVER ISSUE ANY STAMPED PAPER / IN THIS PROVINCE OF NORTH CAROLINA. THIS MONUMENT, BY THE NORTH CAROLINA / SOCIETY OF THE COLONIAL DAMES OF AMERICA, IS COMPOSED OF STONES FROM THE / ORIGINAL FOUNDATION OF TRYON'S PALACE ON THIS SPOT, MAY 5TH. 1909. / LUOLA MURCHISON SPRUNT - PRESIDENT. / GABRIELLE DER. WADDELL, VICE-PRES. CARRIE E. PRINCE, SEC'Y.

Sponsor: North Carolina Society of the Colonial Dames of America

Unveiling & Dedication: The monument was dedicated and unveiled on May 5, 1909 by former society president, Mrs. Gaston Meares.

Post dedication use: Brunswick Town was the site of an annual pilgrimage made by members of the North Carolina Society of the Colonial Dames of America. Today the site is operated as an historic site by the North Carolina Department of Cultural Resources.

Subject notes: Russelborough was the name given to the residence built by Captain John Russell sometime around 1751 near Port Brunswick, although it was unfinished at the time of his death in 1752. The property subsequently passed back to William Moore, who had sold the land to Russell, and by then the property appears to have become known as Russelborough. Moore's estate made an offer of the property and unfinished home to Governor Dobbs, as a permanent site for the colonial capital and the prestige it would bring the developing Brunswick Town, for the price of one shilling per acre and one peppercorn.


Dobbs moved into Russelborough in 1758 from New Bern. During Dobbs's tenure at Russelborough, it was referred to as "Castle Dobbs." Dobbs died in 1765, and the property passed to his son Edward. In 1765, the younger Dobbs sold it to Governor William Tryon who lived there until selling the property and moving the capitol to New Bern in 1770 following unrest in the the Lower Cape Fear area in 1765 and 1766 with resistence to the Stamp Act. Tryon apparently referred to the property as "Castle Tryon." By this time the property had expanded to include a number of outbuildings and stables. William Dry purchased the home from Tryon, renaming it "Bellfont."

At the beginning of the Revolutionary War, British forces burned Russelborough, along with Brunswick Town, leaving ruins. Archeological efforts have since uncovered features of the home and site.

Location: The Brunswick Town State Historic Site is at the intersection of St. Phillips Road Southeast and Brunswick Town Fort Anderson Road on the western bank of the Cape Fear River.

Landscape: The marker stands just inside a fenced area enclosing the property's ruins.