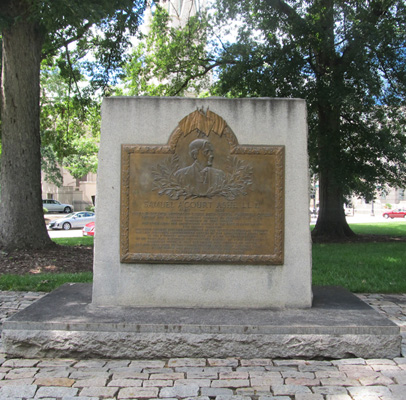 Samuel A'Court Ashe Monument
Raleigh
View complete article and references at Commemorative Landscapes of North Carolina at: https://docsouth.unc.edu/commland/monument/200
Description: The monument consists of two bronze bas-relief plaques mounted on a large granite block. The tablet on the front is imprinted with a portrait of Ashe; both the front and back have detailed inscriptions. The monument is located on the State Capitol grounds.
Images: Front plaque | Rear plaque
Inscription:
Front: SAMUEL A'COURT ASHE LL.D. / 1840 - 1938 / PATRIOT - SOLDIER - HISTORIAN - EDITOR - CHRISTIAN CITIZEN / CAPTAIN AND ASSISTANT ADJUTANT GENERAL OF PENDER'S STAFF. C.S.A. / HEROIC DEFENDER OF FORT WAGNER / AND TWICE CITED FOR CONSPICUOUS SERVICE IN THE BATTLES OF CEDAR RUN / AND SECOND MANASSAS. / BRIGADIER GENERAL AND VICE COMMANDER OF THE UNITED CONFEDERATE VETERANS. / THE LAST SURVIVING COMMISSIONED OFFICER OF THE CONFEDERATE STATES ARMY. / HE WAS A WORTHY REPRESENTATIVE OF A LINE OF PATRIOTIC MEN / OF HIS NAME WHO RENDERED DISTINGUISHED SERVICE TO STATE AND COUNTRY. / ETERNALLY YOUNG, ALWAYS THE FRIEND AND INSPIRER OF YOUTH. / FEW MEN HAVE LIVED SO MANY YEARS, HONORED AND LOVED THROUGH THEM ALL. / A LIFE WHICH HAS ENRICHED THE SOUTH AND THE NATION. / A LOVER OF PEACE, AND VALIANT FOR THE TRUTH.
Rear: THIS MONUMENT PLACED / WITH THE AFFECTION AND ESTEEM OF MANY / FRIENDS THROUGHOUT NORTH CAROLINA / AND THE NATION, WAS UNVEILED SEPT. 13, 1940, / THE ONE HUNDREDTH ANNIVERSARY OF / CAPT. ASHE'S BIRTH. / THE FOLLOWING MEMBERS OF THE ASHE MEMORIAL COMMITTEE / BY THEIR LOYAL WORK AND INFLUENCE HAVE HELPED TO MAKE / POSSIBLE THIS MEMORIAL. / HON. GEORGE GORDON BATTLE, CHAIRMAN / MRS. MARY WINDER OSBORNE, SECRETARY AND TREASURER / HON. JOSEPHUS DANIELS / UNITED STATES AMBASSADOR TO MEXICO / HON. HERIOT CLARKSON / JUSTICE N.C. SUPREME COURT / HON. ERNEST M. GREEN / PRESIDENT N.C. SOCIETY OF THE CINCINNATI / HON. WALTER MURPHY / N.C. STATE SENATOR / MRS. LEWIS E. FISHER / PRESIDENT N.C. DIVISION U.D.C. / HON. WM. GRAHAM JARVIS / HON. THOMAS DIXON
Dedication date: 9/13/1940
Creator: Bernard Johnson, Sculptor Gorham Manufacturing Company, Foundry
Materials & Techniques: Bronze, Wake County granite
Sponsor: North Carolina General Assembly (Funds raised privately), Ashe Memorial Committee
Cost: $3,017
Subject notes: Samuel Ashe was a Confederate soldier who became a captain during the Civil War, most notably leading the Confederate defense of Fort Wagner, South Carolina. Later in life he became the first newspaper editor of the News and Observer as well as an historian and statesman. He assisted in the authoring of an eight volume history of North Carolina. He died on August 31, 1938 at the age of 98, and the monument was presented the public on the 100th anniversary of his birth.
Controversies: In recent years, the Capitol Square's lack of diversity, particularly in regard to monuments honoring deceased Confederate soldiers and leaders like Ashe, has led to the decision of the North Carolina State Capitol Memorial Study Committee to issue a report to the North Carolina Historical Commission calling for new monuments to be built to honor people and causes that exemplify North Carolina's diversity.
Location: The memorial to Samuel Ashe is located near the Confederate Monument and the Henry Lawson Wyatt Monument in the western part of the Capitol Square.
Landscape: The memorial is on a level plain in the Capitol Square near a walkway and near a couple of medium size trees and a park bench.
City: Raleigh
County: Wake
Subjects: Civil War,Historic Civic Figures,Historic Military Figures,Historic Political Figures
Latitude:
35.7807
Longitude:
-78.63919
Subjects:
Monuments
Places
Authors:
Commemorative Landscapes of North Carolina
Origin - location:
Wake County
Raleigh
From:
Commemorative Landscapes of NC, University of North Carolina Chapel Hill.

I am in receipt of a letter

I am in receipt of a letter from the U.K. whereby an Englishman is recording the history of his father's Service in WWII. He recently sent me is a photo of his father at the Samuel Accort Ashe Monument, Capitol Square, Raleigh, NC. Is this Monument still standing, or has it been removed as have many historical items in the recent past? Thank You.

In 2020, many conferate monuments came down, but I do believe that this is still standing because it was not a statue and no listed anywhere as a monument that came down.