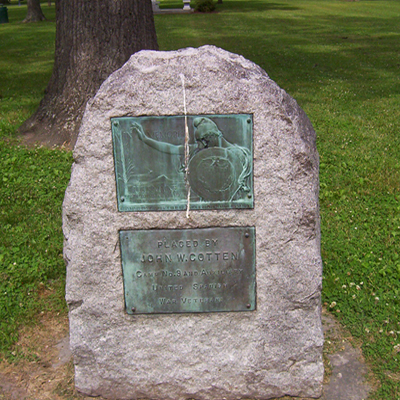 Description: This tombstone-shaped memorial honors the U.S.S. Maine, which was sunk in Havana Harbor shortly before the outbreak of the Spanish-American War. The memorial has two brass plaques: one has an inscription; the other depicts Liberty with a cap and shield saluting the U.S.S. Maine as it sinks into the ocean. There are multiple plaques identical to this one around the country, all of them cast from the bronze of the battleship and with the same inscription.

Sponsor: The monument was placed by John W. Cotton of Camp No. 9 and Auxiliary United States War Veterans.

Subject notes: The USS Maine was sent to protect U.S. interests during Cuba's revolt against Spain. She exploded in the Havana harbor unexpectedly and without explanation in February 1898. Inflammatory articles blamed Spain and "Remember the Maine" became a rallying cry during the Spanish-American War.

Landscape: There are five other historical markers located within walking distance of this marker.