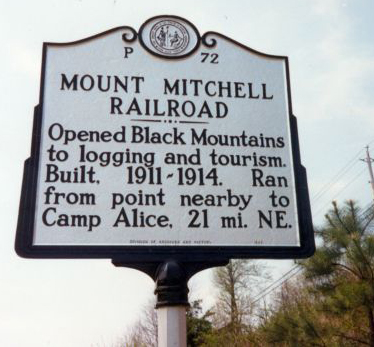 The Mount Mitchell Railroad, although fully operational for only four years, was among the most popular and successful tourist attractions in North Carolina in the early twentieth century. Originally created as a logging enterprise by lumbermen Fred A. Perley and W. H. Crockett, the narrow-gauge line originated near Black Mountain in the Swannanoa Valley and over some 21 miles ascended more than 3,500 feet to Camp Alice, just below the summit of Mount Mitchell. The railroad had been established to transport spruce and other commercial timber, but by 1914 the owners had built passenger cars for use on their logging railroad. Perley and Crockett subsequently hired Col. Sandford H. Cohen, a leading booster of tourism in western North Carolina; under his aggressive promotion, the Mount Mitchell Railroad officially opened for general passenger traffic in July 1915.

Sharing the railbed with the logging trains, the Mount Mitchell Railroad expanded its service and in 1916 carried more than 10,000 passengers to Camp Alice, which had been constructed in 1914 or 1915 specifically for tourists. The camp included a large rustic dining hall and platform tents for overnight campers, and a moderate one-mile trail ascended to Mount Mitchell's summit, the highest elevation in the United States east of the Rocky Mountains. Despite the popularity of the enterprise, the passenger service was terminated in June 1919 so the railroad could be devoted exclusively to timber removal.

By 1921 logging operations had ceased due to the depletion of timber resources. The tracks and ties were pulled up and the old railroad bed was used to create the Mount Mitchell Motor Road, which opened for automobiles in June 1922.