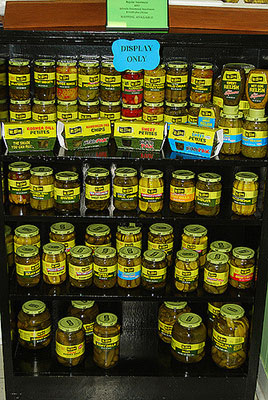 In the early 1920’s, Lebanese immigrant Shirkrey Baddour bought cucumbers from local farmers during a cucumber surplus. He intended to brine them and sell them to other pickle firms, but could not find a buyer for his product. Together with friend and pickle plant worker George Moore, he instead decided to pack and sell his own pickles. By 1925 they were packing more than 6,000 cases of pickles a year.

In January of 1926 the Mount Olive Pickle Company was officially founded in Mount Olive, North Carolina. It had 37 shareholders and was considered a “community proposition.” The company began with a single 3,600 square foot building and $19,500 in capital. Early production of the pickles was by hand, with jars being filled on large tables using old coffee pots.

The company became very successful, and by 1943 had become one of the first 200 companies in the country to introduce a profit sharing plan for employees.

The brand is now the largest independent pickle company in the nation, producing 150 million jars of pickles a year. The Mount Olive facility is now 150 acres, including 1 million square feet of manufacturing space and a tank yard with capacity for over 40 million pounds of cucumbers. About one third of the company's cucumbers are from independent North Carolina farmers.