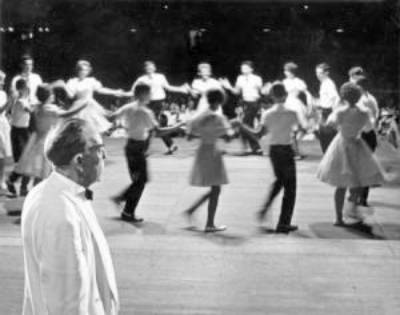 Asheville since 1928. That year, Bascom Lamar Lunsford, a passionate lover of mountain music and culture and an active collector of folk music, organized a contest for musicians and dancers in conjunction with the Rhododendron Festival. This first festival was held on 6 June 1928 in Pack Square in the center of Asheville. In 1930 Lunsford's festival separated from the Rhododendron Festival and became known as the Mountain Dance and Folk Festival. It served as the model for several other important folk festivals that began in the 1930s across the country.

What distinguished the Mountain Dance and Folk Festival from other commercial presentations of mountain music in the budding country music industry and in some other folk festivals of the time was Lunsford's commitment to presenting the musicians and dancers with dignity. The contestants in the festival, who have included some of western North Carolina's finest musicians and dancers for decades, were invited by Lunsford, and he discouraged, for at least the first several years of the festival, the use of "hillbilly" costumes. Although traditional music continued to evolve, especially with the popularity of bluegrass after World War II, Lunsford emphasized the older forms and styles of mountain music while he directed the festival. On the other hand, he encouraged some changes in dance, such as using clog steps in square dancing and using shoes with steel taps, in order to increase the program's appeal to a widening audience. According to some scholars, the festival also had the effect of moving square dancing from private and informal contexts to public and formal settings and introducing an element of competition. The festival declined in popularity somewhat by the early 1960s, but it experienced a resurgence of interest later in the decade and into the 1970s as interest in mountain music grew nationwide.

Although Lunsford died in 1973, the Mountain Dance and Folk Festival has continued to gain in popularity. During the 1980s, the festival was the subject of three documentary films. It remains a leading attraction for both local residents and tourists.

Loyal Jones, Minstrel of the Appalachians: The Story of Bascom Lamar Lunsford (1984).

David E. Whisnant, "Finding the Way between the Old and the New: The Mountain Dance and Folk Festival and Bascom Lamar Lunsford's Work as a Citizen," Appalachian Journal 6 (1979).

The Mountain Dance and Folk Festival is where group cloggin got its start. Image courtesy of Warren Wilson College. Available from http://www.warren-wilson.edu/~appmusic/history.php (accessed May 30, 2012).