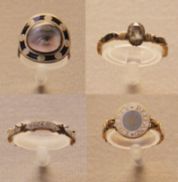 Mourning rings, worn as a memorial of a deceased person, were mentioned as early as 1703 in England. In his will in 1716, James Blunt of Chowan County left each of his five daughters a gold ring, although the rings were not described as mourning rings. The inventory made in 1753 of the estate of Henry Snoad of Beaufort County, however, specifically mentioned a gold mourning ring; the estate of Governor Gabriel Johnston in 1756 included two gold mourning rings. Such rings were advertised for sale in Williamsburg, Va., in the Virginia Gazette of 4 June 1772. At her death in Edenton in 1775, Mrs. Jean Corbin owned two gold mourning rings. Richard Blackledge of Craven County, in his will of 20 Feb. 1776, left £10 each to his daughter and to Betsey Baker to buy mourning rings. Numerous wills survive in the records of North Carolina in which bequests for this purpose are mentioned, and Earl G. Swem's Virginia Historical Index includes an even larger number of such bequests.