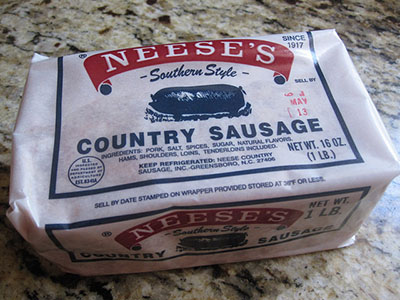 Neese’s Country Sausage is a pork product company based out of Greensboro, North Carolina. The Neese family has been making homemade sausage since the 1800’s, though until the twentieth century it was only for home use. In 1917, JT Neese began selling his family’s sausage products to friends and neighbors in Greensboro out of a covered wagon. The sausage was hand ground and made from the family farm. In 1925 Neese purchased a dodge screen-sided truck and began delivering the products daily in Greensboro and High Point.

In the 1920’s Neese’s wife, Annie Smith Neese, added her secret liver pudding recipe to the products offered, and it became equally popular. By 1930 the business was flourishing, and sons Tom and Homer Neese officially took over the company.

Today, the Neese’s Country Sausage is run by the 4th generation of the family. The company is noted for their products rectangular block shape, as well as its lack of meat additives and fillers. Products sold now include, in addition to the traditional sausage and liver pudding, varieties of livermush, scrapple, souse, and bacon.

I love liver pudding I can

I miss your sausage. I moved

I miss your sausage. I moved from Fayetteville NC to Wooster Ohio and can't find your product anywhere. Please help me locate it in my area if possible. Thank you. Sausage gravy with Nesse's , there are no substitutes.

This is an article about the company, but this is not the company's page. I suggest you go to their website at https://neesesausage.com/.