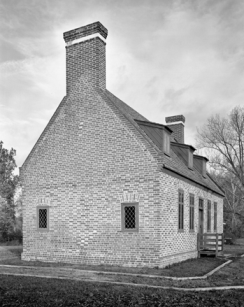 The Newbold-White House, located near Hertford in Perquimans County on the west bank of the Perquimans River adjacent to the Albemarle Sound, is one of North Carolina's oldest examples of colonial architecture. The house served as an important meeting place for the state's Quaker congregations as well as a center for governmental courts and assemblies. It stands as a unique link to North Carolina's Proprietary period. A construction date of 1730 has been given to the brick house based on dendrochronology tests of the rafter timbers. The pre-Georgian architecture of the building and available deed records indicated that a late seventeenth-century occupation period is plausible. While the extant house dates to the early eighteenth century, archaeological features and land records suggest a previous dwelling on the tract. A land grant from the Lords Proprietors to Joseph Scott for 640 acres included this tract of land and house site. Personal journals of Quaker missionary George Fox describe a meeting with Joseph Scott and his neighbors at his home in 1672. Later Scott, along with his family and neighbors, established their own Quaker congregation.

Following the death of his first wife, Scott married Mary Hudson in 1683. Until her death in 1692, Mary Hudson Scott opened her home as a meeting place for Quaker congregations and for sessions of the county precinct court and assembly. James Coles and his wife, Mary, bought the land in 1703 and continued to hold court sessions at the farm. The property was sold at auction in 1726 and was bought by Abraham Saunders, a Quaker and planter. Saunders most likely built the one-and-one-half-story brick dwelling that later came to be known as the Newbold-White House. The name Newbold-White derived from its last two private owners, Jim Woodward White and John Henry Newbold. The Perquimans County Restoration Association, Inc., purchased the house in 1973 with the intention of preserving it as a historic site.

Archaeological research on the Newbold-White House began in 1970 and continued intermittently until 1994. Findings include a cemetery, cellar, outbuildings, and thousands of domestic-related artifacts dating from the seventeenth to nineteenth centuries. For archaeologists, the site offers valuable information into the material culture of early English settlement in North Carolina.

For architects and historians, the house is an interpretative jewel of the early eighteenth century. A simple, rectangular structure, the house measures 20 by 40 feet, with a steep gabled roof framed by common rafters and end chimneys. Oriented lengthwise to the river, it has central doors on each front and small, segmented-arched windows. It conforms to a hall-parlor plan, having two rooms of unequal dimensions with a central hallway. Originally visitors entered the hall, where most cooking, socializing, and public events occurred, then passed into the parlor, or the more private portion of the house. During the middle to late eighteenth century, a partition was installed to create the central passage, equalizing the size of each room. The exterior walls of the house are laid in Flemish bond with glazed headers, forming a checkerboard pattern. Architectural restoration of the house took place in the 1970s, at which time all modifications were removed and the house restored to its original eighteenth-century appearance.