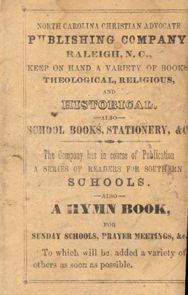 At a meeting of the Eastern North Carolina Conference of the Methodist Episcopal Church, South, in Pittsboro in December 1854, the idea for the publication of a paper as an official church organ was discussed and adopted. The first issue of the Raleigh Christian Advocate, as the paper was called, appeared on 4 Jan. 1856. The Advocate was suspended during the Civil War, reappearing as the Episcopal Methodist on 16 Jan. 1867, with H. T. Hudson as managing editor. After several years of leadership changes at the paper and only sporadic success, church leaders proposed the merging of the Episcopal Methodist with the Western Carolina Advocate, the official organ of the Western North Carolina Conference of the Methodist Episcopal Church, South. The merger was not finalized until 1919, when church leaders decided that having one paper would strengthen the bonds of fraternity and brotherhood between North Carolina's two Methodist conferences. Under a new charter providing for a joint publication board to be known as the Methodist Board of Publication, with its principal office in Greensboro, the North Carolina Christian Advocate became the official organ of the state's Methodists.

Since the merger, the Advocate has consistently publicized the work of the Methodist Church in the state, offering church members news and information regarding Methodist agencies and programs, missions, and disaster relief initiatives.