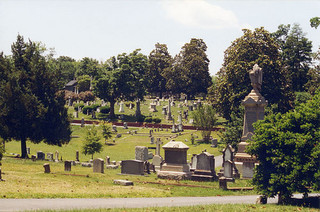 Oakwood Cemetery in Raleigh was established by the Raleigh Cemetery Association in 1869, making it Raleigh's oldest private, nonprofit cemetery. The cemetery is located on gently rolling hills adjacent to downtown Raleigh, its numerous monuments and markers set off by the natural topography, featuring oaks, cedars, and flowering trees and a meandering stream. Seven North Carolina governors, five United States senators, eight chief justices of the North Carolina Supreme Court, and Raleigh's first mayor are buried in Oakwood. A Jewish cemetery and a Confederate Cemetery, containing the graves of 2,800 Confederate dead, also lie within Oakwood Cemetery's boundaries.

The Confederate Cemetery was established directly after the close of the Civil War, in 1866. A group of Raleigh women conceived the idea of establishing a permanent burial place for Confederate soldiers who at that time were buried on the location of the present Federal Cemetery on Rock Quarry Road. Using land donated by Henry Mordecai, the Wake County Ladies' Memorial Association began the preparation of a graveyard on the new site. In 1867 a federal agent was sent to Raleigh to find a cemetery site for Union soldiers. He chose the Rock Quarry Road location and gave local citizens three days to move their Confederate dead from that cemetery. More than 500 bodies were hurriedly exhumed and relocated on the Mordecai property.