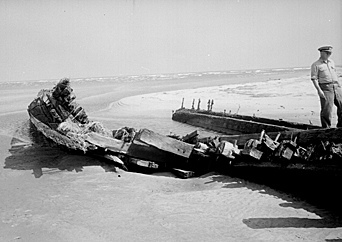 Old Quawk's Day, by long-standing tradition, is a day when residents of Ocracoke Island on North Carolina's Outer Banks are advised not to wander far from home. It was on that day many years ago that an unsociable, eccentric man who had been shipwrecked on Ocracoke and decided to take up residence there is said to have shoved off in his small fishing boat at the height of a tempest, all the while shouting blasphemous threats toward heaven. He was never seen or heard from again. Ever since then, according to the legend, there have been an unseemly number of shipwrecks and lost lives on that date.

Nobody knew the man's name, but because of his strange, guttural voice they called him Old Quawk (or Quork, or Quoke). In modern times, there is a point on Ocracoke Island with that name, and nearby a creek and hammock. Although the story figures prominently in Ocracoke Island folklore, there is little uniformity in the way it is told. In his 1956 book Ocracoke, Carl Goerch listed Old Quawk's Day as 16 March and traced the event back to the early part of the nineteenth century. Yet in his Legends of the Outer Banks and Tar Heel Tidewater (1966), folklorist Charles Harry Whedbee gave the date as 6 Feb. 1788. Goerch stated that the name came from the resemblance of the man's voice, particularly when he was excited, to the cry of the coastal night heron, which is nicknamed "the qwak." Whedbee, however, attributed the name to the sound made by the croaker, a common coastal fish. All seem to agree, though, that Old Quawk was a strange and disagreeable man who lived apart from others on the island and made contact with fellow Ocracokers only when he had fish to sell or supplies to buy. To this day, many old-timers agree that it is prudent not to venture out on the water on Old Quawk's Day.