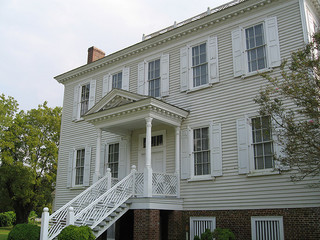 Plantation names began to be used in the North Carolina area in the seventeenth century as a means of identifying specific tracts of land. The eight original Lords Proprietors of Carolina spoke of their large grant of land from the Atlantic Ocean to the Pacific through the middle of North America as their "Plantation of Carolina." With an increasing population as well as a growing area of settlement, individual owners of smaller tracts within the expansive Carolina grant also sometimes referred to their personal grants as plantations.

Names were adopted as means of defining places of residence. These names often provide clues to the origin or descent of a family. Sometimes they also offer clues to the political or religious attachment of the owner or some natural feature of the site, or they even offer a bit of humor. In some cases, a name became so familiar or closely associated with a place or family that it was retained for generations and became that of the local community, a post office, or a nearby town.

There was no requirement that a plantation name be registered, nor was a name necessarily considered to be permanently associated with a site-an heir or a new owner, for example, might change the name or use no name at all. Although an owner might ask the county court or other local office to record his choice in county records, such a request carried no advantage. Nevertheless, hundreds of such names were adopted, although only a fraction of these are still known. Orton, Cooleemee, and Hope are among the plantation names still in use.

J. Bryan Grimes, North Carolina secretary of state in the early twentieth century, compiled and published two volumes-Abstract of North Carolina Wills (1910) and North Carolina Wills and Inventories (1912)-that contain information that often includes the names of plantations and farms dating from the seventeenth and eighteenth centuries. His information was drawn from records then in the office of the secretary of state but more recently in the Office of Archives and History in Raleigh. Grimes's volumes contain names of 329 plantations that can be reasonably identified as well as many not fully cited in the records; plantation names also occur in works on architecture, local history, and genealogy.

Grimes, J. Bryan. 1910. Abstract of North Carolina wills compiled from original and recorded wills in the office of the Secretary of State. Raleigh: E.M. Uzzell. archive.org/details/abstractofnorthc01nort