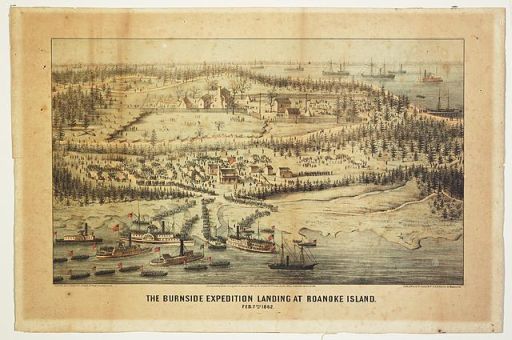 In February 1862 a Civil War battle was fought at Roanoke Island, situated in the narrow passage of water between Pamlico and Albemarle Sounds. With Union forces in possession of Hatteras Inlet since August 1861, the island was a critical link in North Carolina's defenses, denying Union access to Albemarle Sound, the canals leading to Norfolk, and the upper third of the state's coast. In January 1862 Maj. Gen. Ambrose E. Burnside had arrived at Hatteras Inlet with a Union fleet, intending to sweep through and secure the rivers and sounds of North Carolina. On 5 February he headed north up the sound to attack Roanoke Island.

To defend the island, Brig. Gen. Henry A. Wise commanded less than 2,500 Confederates, most of whom were poorly armed and equipped. Wise himself lay sick in bed at Nags Head, leaving Col. H. M. Shaw of the 8th North Carolina in charge of the island's defense. Reaching Roanoke Island on the morning of 7 February, Burnside's gunboats kept up a long-range bombardment from midmorning until dark. After dark, his ordnance expended, Flag Officer William F. Lynch took his Confederate "mosquito fleet" to Elizabeth City in search of more ammunition and was unable to return for the remainder of the battle. Meanwhile, Burnside landed about 10,000 soldiers on the lower end of Roanoke Island unopposed and prepared to attack the next day. 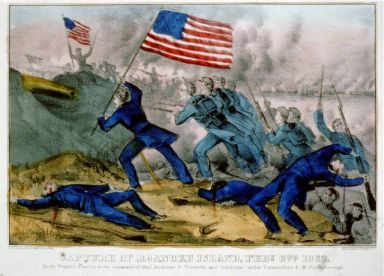 Shaw's only hope of resisting the Union forces lay in a three-gun battery and a line of entrenchments built across the island, but the works were so narrow that only 400 men could fit into them. Early on 8 February Burnside's First Brigade, under Brig. Gen. John G. Foster, led the advance up the island's road, reaching the Confederate battery and works at about 8:00 a.m. When Foster failed to drive the Confederates from the works, he sent troops through the swamps to flank them.

Assailed simultaneously from all sides, the Confederates were forced to abandon the works and retreat up the island. Shaw, having no second line of defense, surrendered the island, its defenders, and defenses to Burnside. Along with their forts, artillery, and most of their weapons, 2,488 troops capitulated. A handful of Confederates managed to escape from the island to Nags Head and join General Wise as he retreated up the Outer Banks with the remnant of his command.

The Union army's losses at Roanoke Island were 37 killed, 214 wounded, and 13 missing; its navy suffered 1 killed and 13 wounded. In addition to those captured, Confederate losses were 23 killed, 58 wounded, and 62 missing. Six Confederate naval personnel were also wounded. General Burnside now had achieved his first objective-the key to the northeast sounds of North Carolina. His next objective was New Bern.