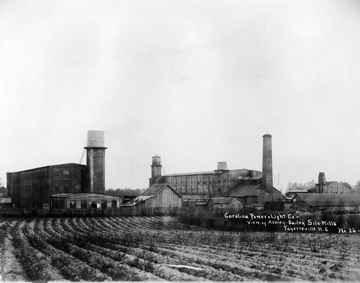 Early travel writers and government officials speculated that the climate and soil of the land that would become North Carolina would readily support the growing of silkworms. The Carolina charter of 1663 mentioned silk, and several royal governors tried to encourage silk production. Silk had for centuries been a Chinese monopoly, until silkworm eggs were smuggled from China to the West. Silk is made by the caterpillar of the silkworm moth (Bombyx mori). Mulberry leaves are the best food for silkworm larvae, and since mulberry trees grew readily in much of North Carolina, eager entrepreneurs were tempted to try to make fortunes from silk. Antebellum sources reported that 3,000 silkworm cocoons, weighing about nine pounds, would yield a pound of silk, and that an acre of mulberry trees would support 500,000 silkworms. Many families set up silk production on a small scale, planting mulberry trees in their yards and using attics as space for caring for the silkworms. In 1840, with cotton bringing seven or eight cents per pound, the lure of raising silk, which when reeled from the cocoons sold for four dollars per pound, was considerable.

Enthusiasm for silk cultivation reached its peak in North Carolina in the antebellum period and died down rapidly soon after. The activity of planting mulberry trees and raising silkworms was jokingly called "Morus multicaulis mania." Many merchants sold mulberry trees and silkworm eggs; a Raleigh bookstore with such a sideline sold the eggs at ten dollars an ounce in 1840. Several factors were blamed for the end of the silk "mania" in North Carolina, among them the shortage of skilled, economical labor and the lack of knowledge and preparation on the part of many of the investors.

Numerous silk mills, which processed imported silk into thread, opened in North Carolina in the late nineteenth and early twentieth centuries. The last silk mill in the state, in Greensboro, operated until the 1930s. In the end, the attempts at producing silk in North Carolina left only a few lasting results: a great number of mulberry trees, including some very large, gnarled ones at the Charles B. Aycock Birthplace State Historic Site near Fremont, and Silk Hope, the name of a community in Chatham County.

I'm 71. White, female. My grandmother use to tell me of the days she worked in a silk mill in Rocky Mount NC. This would have been around 1910-1930. Until the day she died in 1986, she looked down her nose on silk as a cloth worn by the poor. She was poor and silk fabric that was leftover was distributed to the workers so they could make their clothing. I cannot locate any information on any silk mill in Rocky Mount. She claimed she worked as a child and into adulthood at the mill.

I think that silkworms have

I think that silkworms have infested our house
Do they turn into Motjs?

Thank you for visiting NCpedia. Yes! Silkworms turn into Moths.