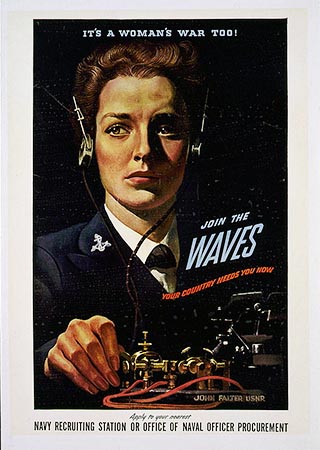 Martha Carolyn Armstrong Silver was a member of the U.S. Naval Reserve program Women Accepted for Volunteer Emergency Service (known as WAVES) during World War II. The WAVES program was established on July 30, 1942 to formally include women in the Navy. During WWII, more than 80,000 women participated in the program, and they filled an extraordinary range of military jobs. These included traditional secretarial jobs and also highly technical and advanced positions such as control tower operators, transport and test pilots and positions in military communications and intelligence gathering. The program was created to serve emergency personnel needs during the war. In 1948, women were at last given permanent status in all branches of the U.S. military with the Women's Armed Services Integration Act, ending the WAVES program.

Martha Armstrong was born on March 12, 1924 in Simpsonville, South Carolina to parents William C. and Ettie Armstrong. Her father had been in the military in World War I and later worked as a mail clerk for a railway line. When she was a young child, the family moved to Hendersonville, North Carolina. She had one brother, James William Armstrong, who was drafted and served in the Korean War.

Martha Armstrong learned about the WAVES from the war effort.  She was 17 when the war started but could not enlist until she was 20 with her parents' consent. She remembered that with the creation of WAVES, women were called upon to take up where the men left off stateside when they went overseas to fight in the war, and she felt that it was her duty to serve.

She also recalled being keenly aware of what was happening during the war and wartime efforts on the home front. She especially recalled supply rationing, and when her father passed away, she remembered finding wartime ration coupons that he had saved. She also recalled meeting soldiers who were stationed at Camp Croft in nearby Spartanburg, South Carolina. She remembered that they would drive up to Hendersonville on the weekends, and local people would invite them into their homes for dinner. She also remembered taking the bus to Camp Croft a few times a month to go to dances.

In 1944 at age 20 when she became old enough to enlist, she was taking a secretarial course in Asheville, North Carolina, but she wanted to be more than a secretary.  The nearest enlistment office was in Knoxville, Tennessee so she took the bus there to enlist and then traveled to Hunter College in New York City for basic training. In an oral history interview, she recalled with humor that she enlisted in the WAVES because she looked better in blue than tan.

During basic training, she did the best with learning codes and was sent to radio school at Miami Univeristy of Ohio for advanced training. There she learned how to operate and repair radios and how to type and translate codes. By 1945 she was stationed at the Squantum Naval Air Station in Quincy, Massachusetts. Armstrong served in the WAVES from March 1944 to September 1945, reaching the rank of Seaman First Class.

After the war, Martha Armstrong returned to Hendersonville. She married Michael Julian Silver on April 19, 1952 in Orange County, North Carolina.  Michael Silver was the chief radio announcer at WNAO in Raleigh, and he also worked at Channel 28, the Triangle's first television station.  He later went on to start his own advertising agency in 1969, McKinney & Silver, with his colleague Charles "Chick" McKinney. Today McKinney is one of the largest ad agencies in the Southeastern U.S.

Listen to a recording of an oral history interview of Martha Carolyn Armstrong Silver, taken on May 21, 2004​. In the interview Silver talks about growing up in Hendersonville, North Carolina and her experience of World War II there, her time in the military, and her life after leaving military service.