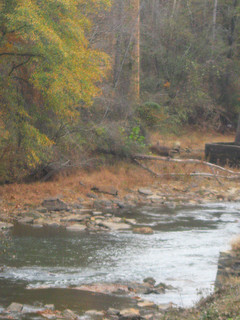 The Battle of South Pacolet River, a Revolutionary War engagement, occurred along the North Carolina-South Carolina border on the night of 14-15 July 1780 as a result of Loyalist colonel Alexander Innes having sent a Major Dunlap with 70 dragoons from Prince's Fort to pursue Col. John Jones's 35 Georgians. Jones was traveling northward through the upcountry to join the first Whig force he could find. Pretending to be Loyalists, Jones's troops had killed or captured about 40 South Carolina Loyalists at Gowen's Old Fort late on 13 July. Fleeing northward, Jones joined Col. Charles McDowell's force north of Earle's Ford on the South Pacolet River on 14 July. That night Dunlap attacked the combined camps of Jones and McDowell, killing two men and wounding six. Outnumbered, Dunlap retreated to Prince's Fort, and Col. Edward Hampton pursued and killed several of Dunlap's men. These events strengthened the Whig cause in the upcountry.