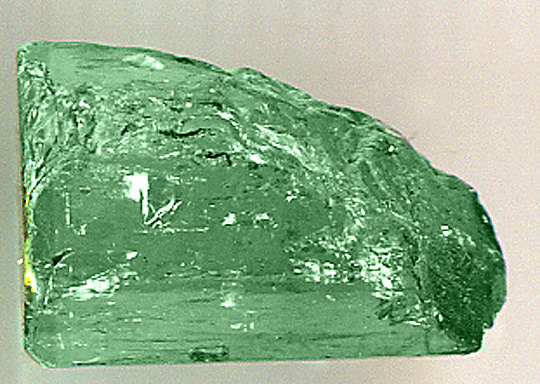 Selection as the State Precious Stone

The Bill to establish the Emerald as the State Precious Stone was introduced by Rep. Margaret Keesee of Guilford county in January of 1973. It received little opposition and was passed in April of 1973.

An Emerald is a green variety of beryl highly prized as a gemstone. Emeralds are one of the ‘big four’ gemstones (Diamonds, Emeralds, Rubies, and Sapphires) that are most popular for jewelry and commercial use. The beryl’s natural color is clear, but gets its color from small amounts of chromium and vanadium. They will lose their color if heated. Emeralds occur naturally as six sided prisms, sometimes called ‘bolts,’ and are usually elongated with smooth sides.

North Carolina has the only significant emerald deposits in North America.

Emeralds were first found in Alexander County in 1874, and later in Mitchell County (1890) and Cleveland County (1897). Today, these are North Carolina’s three known emerald districts.

North Carolina’s emeralds are found in pockets of quartz veins. Pockets can range from a few centimeters to three meters in length.

An emerald crystal weighing 1869 carats, thought to be the largest ever found in North America, was unearthed in late 2003 at a mine in Hiddenite, near Statesville. A 71-carat stone found on the same property yielded two finished stones--the 7.85 carat Carolina Prince that sold for $500,000, and the Carolina Queen (18.88 carats). Other famous emeralds of North Carolina include the 858 carat “Empress Caroline” and the cut 64.82 carat “Carolina Emperor,” which is styled after an emerald once owned by Empress Catherine the Great of Russia.

Due to their rarity, synthetic emeralds are also produced in the United States through a hydrothermal method, in which aquamarine crystals are placed in a water solution under high temperatures and pressure.

Old folktales attribute many properties to the emerald. It has been said that they can cure dysentery, prevent epilepsy, assist women in childbirth, preserve chastity, and even drive away evil spirits.

The gem hiddenite is a relative of the emerald and is one of the rarest gems in the world. It can be found in very few places, one of which is Alexander County, North Carolina. It was discovered 1879 in the town of White Plains by Dr. William Hidden. Hidden was sent to the area by Thomas Edison to find an alternative material to replace tungsten in light bulbs. He found instead a variety of spodumene never before seen. The stone was named Hiddenite, and the town of White Plains was renamed Hiddenite in its honor. Hiddenite is not mined commercially, but it can be cut as a gemstone.

AN ACT TO DESIGNATE THE EMERALD THE PRECIOUS STONE OF THE STATE.

Section 1.  Chapter 145 of the North Carolina General  Statutes is amended by adding the following section thereto:

"§ 145-8. The Emerald is hereby adopted as the official State precious stone of the State of North Carolina."

Sec. 2. This act shall become effective upon the opening of the National Gem Show in Charlotte June 28, 1973.

In the General Assembly read three times and ratified, this the 5th day of April, 1973.