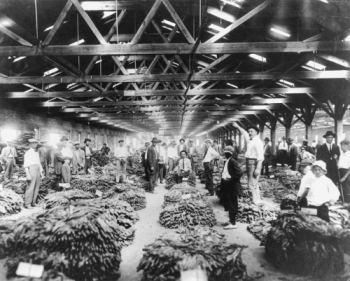 Tobacco auctions, highlighted by the unique chant of the tobacco auctioneer, were one of North Carolina's most interesting cultural phenomena. They took place in the state's many tobacco market towns, found as far west as the Asheville burley tobacco auction, east in the flue-cured auction in Greenville, and south in Tabor City and other towns near the South Carolina border. Complete with the chanting auctioneer, the animated warehouse sales leader, and an array of buyers nodding and winking as they bid on each "lot" or "pile," tobacco auctions drew farmers, merchants, tobacco buyers, and curious onlookers. Their importance to local economies was immense: when the auction was over, locals knew by the prices paid to the farmers whether or not they would enjoy a good economic year.

The contemporary "loose-leaf" tobacco auction, during which the tobacco was made available for buyers to inspect at length, premiered in 1858 in Danville, Va., and became the primary method of selling bright leaf tobacco in North Carolina. This method was necessitated, in part, by a chronic distrust between tobacco buyers and those who produced, planted, or sold tobacco.

By 2006, following the economic and cultural upheavals affecting the tobacco industry, tobacco auctions had become largely a thing of the past.