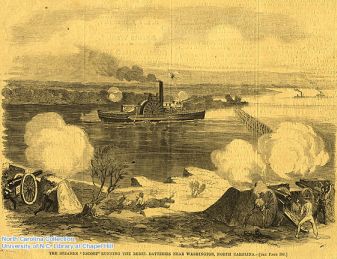 the september 1862 attack on washington, n.c., marked the first major confederate attempt to recapture eastern north carolina towns taken by union forces earlier in the civil war. before sunrise on 6 september, maj. stephen d. pool and his roughly 700 men from the 1st north carolina artillery and the 8th, 17th, and 55th north carolina infantry launched a surprise attack on washington. pool's first column overwhelmed union pickets on the west side of washington and stormed through the town. during the fighting, the union gunboat picket exploded and sank. pool's second column encountered stiffer resistance but was soon able to push through the unionist defenders into town as well.

col. edward e. potter commanded washington's defending forces, which included the 1st north carolina union volunteers. union cavalry fanned out through the streets, but resistance proved too heavy. potter withdrew his artillery and infantry to permit the union gunboat louisiana to open fire on the town. its heavy guns turned the tide and the confederates withdrew.

the union lost 8 killed, 36 wounded, and 12 missing or captured as well as the picket and 20 of its crew killed (including the captain) and 6 wounded. confederate losses were at least 13 killed, 57 wounded, and about 20 captured.

"the steams 'escort' running the rebel batteries near washington, nc. harper's weekly, may 9, 1863. courtesy of the north carolina collection, univerity of north carolina libraries. available from http://www.lib.unc.edu/ncc/pcoll/civilwar/80-430.jpg (accessed may 18, 2012).