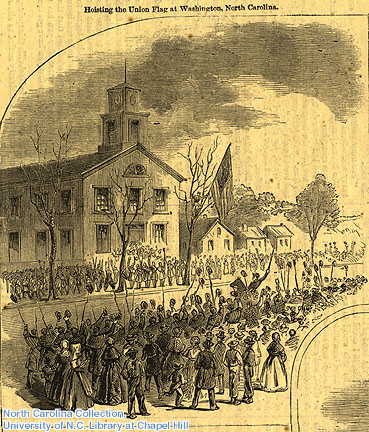 The Confederate siege of Union-occupied Washington, N.C., extended from 30 March to 16 April 1863. The primary goal was to capture the town, but if that was not possible, the secondary goal was to tie up the garrison and keep Union forces on the defensive. Earlier, Maj. Gen. John G. Foster, leading the Union Department of North Carolina, arrived at Washington to assume command of about 1,200 men, including the 1st North Carolina Union Volunteers. Three gunboats supported this force. Foster ordered reinforcements, but before they could arrive, the Confederacy's Maj. Gen. Daniel H. Hill approached the town on 30 March with about 5,000 troops. Since the element of surprise was lost and a direct assault had little chance of success, Hill besieged the town while his supply wagons gathered provisions from the region. The Confederates erected an earthwork battery, Fort Hill, six miles below Washington at Hill's Point, and its guns prevented Union transports from reaching Washington with reinforcements. Foster and his small garrison were surrounded.

The siege involved several engagements-mostly exchanges between Confederate batteries and Union gunboats and town defenses. On the night of 13 April, however, the Union steamer Escort succeeded in running the blockade to Washington carrying supplies, ammunition, and reinforcements. As a result, during 15-16 April Hill abandoned the siege and withdrew his forces. Although he failed to capture Washington, Hill did manage to throw the Union forces on the defensive and to gather large quantities of food from Union-held areas.

"Hoisting the Untion Flag at Washington, North Carolina."  North Carolina Collection at the University of North Carolina Libraries.Available from http://www.lib.unc.edu/ncc/pcoll/civilwar/index.html?list=Campaigns_and_Battles (accessed May 18, 2012).