Jaunita Hartense Hamilton [later Webster] studied nursing in the early 1940s and became a nurse. Soon after the Japanese bombed Pearl Harbor in December of 1942, she enlisted in the Army and joined the Army Nurse Corps. After she was discharged in 1945, she spent a long and successful career in the nursing field.

She graduated from high school in 1934 and worked briefly in a hosiery mill in Hendersonville before deciding to study nursing. She saved up money from working and moved to Washington, D.C. to live with an aunt while she attended nursing school. She trained at Gallinger Municpal Hospital in a program that lasted three years. After graduating, she worked briefly as a private duty nurse. 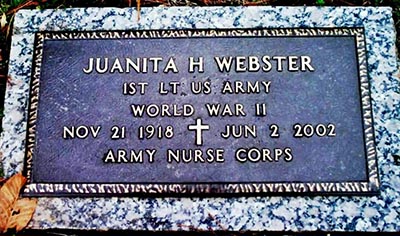 Jaunita Hamilton was keen to join the Army, with the climate of increasing tension and pressure on the U.S. to support the war. After the Japanese bombed Pearl Harbor in December 1941, she knew that she had to join up. Shortly after, she enlisted in the Army and entered the Army Nurse Corps. She was assigned to the 153rd Army Station Hospital and sent to Brisbane, Australia in 1942 as part of the first group of nurses to be stationed in the south Pacific to treat war casualties. From there she was stationed for a time in New Guinea. In her unit there she met her future husband, Douglas James Webster, an Air Force Staff Sergeant.

After Hamilton returned to the U.S., the Army sent her to nurse anesthetist school. She eventually reached the rank of First Lieutenant. After she was discharged in 1945, she had a long and varied career in nursing that included contributions to nursing education, public health, and hosptial administration. She worked as a nurse anesthetist and instructor in nursing programs, became Director of the Department of Anesthesia at Baylor University in Houston, Texas, and worked as a consultant for the Joint Commission on Accreditation for Hospitals.

Her husband passed away in 1981. Juanita H. Webster died on June 2, 2002. At the time of her death she was living in Penrose, North Carolina, near Brevard in Transylvania County. She was buried in the Blue Ridge Gardens of Memory Cemetery in the Pisgah Forest.

Listen to a recording of an oral history interview of Juanita Hartense Hamilton Webster, taken on August 25, 2001. In the interview Webster discusses growing up in North Carolina, her time in the military, and her career after leaving military service.