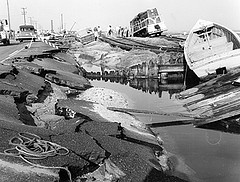 The year 1842 saw North Carolina's coast pounded by two severe hurricanes. The remoteness of many of the state's coastal settlements at the time, particularly those on the Outer Banks, and the lack of good transportation and communications made warning citizens of approaching storms difficult. As a result, people most often did not have time to leave their homes before the advancing storms struck and sometimes could not even return to shore or secure their boats. Although hurricanes generally were not given names before the mid-twentieth century, these two anonymous storms caused such massive devastation and loss of life that their place in North Carolina history is secure.

The season's first storm struck on 12 July 1842, following two months of nearly constant rain. This hurricane caused immense damage, destroying bridges, mills, homes, fences, ships, stores, livestock, crops, and supplies. The 27 July Washington Whig reported that this storm was "more violent than had ever before been experienced by the oldest citizens of Portsmouth and Ocracoke." The worst effects were felt on the Outer Banks, particularly Portsmouth, and many people were killed and injured. Floodwaters continued to rise and cause damage for days afterward. Little over a month later, on 23 August, another hurricane hit the slowly recovering and rebuilding coast, bringing more misery and ruin. At least three ships, along with their crews, were lost during this storm. Although coastal residents were by no means unaccustomed to severe weather during the state's fall hurricane season, the immense havoc wreaked by these storms far exceeded their expectations, making the "wet year" of 1842 one of the state's worst pre-twentieth-century natural disasters.

The North Carolina Shore and Its Barrier Islands: Restless Ribbons of Sand.  By Orrin H. Pilkey.