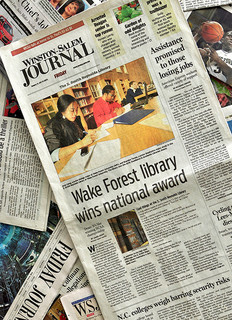 The Winston-Salem Journal, located in North Carolina's fifth-largest city, is one of the state's most influential newspapers, and several of its owners, editors, and reporters have gone on to play significant roles in the national media. Editorially, the Journal has supported many local and statewide causes that reflected the desires of some of the city's elite business and philanthropic households, such as the Hanes, Reynolds, Babcock, and Gray families. This was reflected in the paper's support for the restoration of Old Salem, the relocation of Wake Forest University to Winston-Salem in 1956, and the establishment of the North Carolina School of the Arts in the city.

The Winston-Salem Journal was founded by Charles Landon Knight and James Robert Justice on 3 Apr. 1897. Knight was the father of John S. and James L. Knight, who later built Knight Ridder, Inc., the largest newspaper chain in the country in terms of total circulation. By 1925 the Journal was engaged in cutthroat competition with its local rival, the Daily Sentinel. After five months of feuding, Sentinel owner Frank Gannett-founder of the Gannett Company, another of the nation's premier newspaper companies and owner of USA Today-sold his paper to the Winston-Salem Journal Company.

In 1971 the Journal and Sentinel were awarded the Pulitzer Prize primarily for their year-long campaign in print to save territory in western North Carolina and Virginia from the hazardous effects of strip mining. When reporters discovered that the Gibbsite Corporation was planning to buy mineral rights in order to strip-mine the land, a stream of articles had appeared in both papers throughout 1970 about the dangers it would pose to the environment and its residents. Facing media criticism and regional opposition, Gibbsite announced its intention to allow its options on the land to lapse.

The Sentinel continued to circulate until declining readership forced it to cease publication in 1985. The Journal, purchased in 1969 by Media General, Inc., a publicly owned communications company, has remained the primary daily newspaper for Winston-Salem. Soaring production costs and declining readership forced the paper to downsize in 1995, resulting in the dismissal of 86 employees. Other moves to economize and respond to changing markets have included the complete computerization of editing and design procedures, as well as establishing a Journal website on the Internet in 1996.

Many talented journalists spent time at the Winston-Salem Journal, including Tom Wicker and Marjorie Hunter, who later worked for the New York Times; Joe Doster, who left the Charlotte Observer to become publisher of the Journal; and Chester Davis and Roy Thompson, who dominated the feature-writing contests of the North Carolina Press Association from the 1940s to the 1960s.

By the early 2000s the Winston-Salem Journal had a daily circulation of about 93,000 and served residents of Forsyth and other counties in northwestern North Carolina and southwestern Virginia. The Journal has begun to shift its emphasis from national events to more community coverage in an effort to compete with other media.

"Resolution No. 49: Joint Resolution of the House and Senate. Relating to Furnishing Members Copies of the Winston-Salem Journal." 1925. p.626. Public laws and resolutions passed by the General Assembly at its session of 1925. Raleigh [N.C.]: Edwards and Broughton. http://digital.ncdcr.gov/u?/p249901coll22,236854