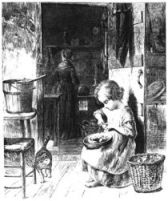 Yeomen constituted a class of people in colonial society that generally owned and worked their own land, ranking below the gentry in the social order. The term was applied in North Carolina to the largest body of settlers. As a group, yeomen have been described in general terms as strong, fearless, simple in tastes, crude in manners, provincial in outlook, democratic in social relations, tenacious of their rights, sensitive to encroachments on their personal liberties, and, when interested at all in religion, earnest, narrow, and dogmatic. It was these people, in the minds of outsiders, who characterized the colony.

Yeoman family. From The Way We Lived in North Carolina, edited by Joe A. Mobley. 2003 University of North Carolina Press, published in association with the North Carolina Office of Archives and History, Raleigh.