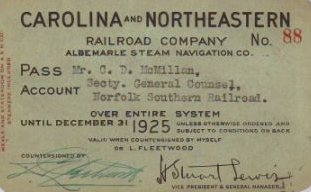 The Albemarle Steam Navigation Company was incorporated in 1860 as the Albemarle Steam Packet Company. Its 24 initial investors included Edward Wood, Henry A. Bond, Joseph Norcom, and others of the town of Edenton and counties bordering the Chowan River. The group planned to operate one or more boats between Edenton and the Seaboard & Roanoke Railroad station at Franklin, Va., on the Blackwater River. In 1860 it ordered a 155-foot passenger and freight boat, the Virginia Dare, to be built by Harlan and Hollingsworth of Wilmington, Del. Not quite finished when the Civil War began, the vessel was purchased by the U.S. Navy, converted into a gunboat, and renamed the Delaware. Ironically, the Delaware became the flagship of Vice Adm. L. M. Goldsborough's squadron, which participated in the capture of Roanoke Island in early 1862 and cleared Albemarle Sound and its tributaries of Confederate traffic.

Edward Wood headed the investors who incorporated the Albemarle Steam Navigation Company (ASN) in 1866 for the same Blackwater-Chowan route. The company began operations with a former Civil War blockade-runner, the 170-foot side-wheeler Ells. Over the next six decades, the ASN provided service for the Edenton-Franklin and other routes in the Albemarle Sound area, connecting with various steamboat companies plying the waters between Norfolk and the Cape Fear River.

The firm was recognized for relatively reliable, fast, and safe service, but it experienced perhaps the worst disaster in North Carolina's steam transportation history. On the night of 16 Feb. 1903, its 130-foot Olive was capsized by a line squall about a mile from Holley's Wharf on the Chowan River. The loss of 17 lives is said to have been the only fatal accident in the ASN's history. Apparently a later victim of railroad competition, the company ceased operations in 1929.

Boarding Pass for the Carolina and Northeastern Railroad Co. and the Albermarle Steam Navigation Co. Item S.HS.2012.1.153, from the collection of the NC Museum of History. http://collections.ncdcr.gov/RediscoveryProficioPublicSearch/ShowItem.as...