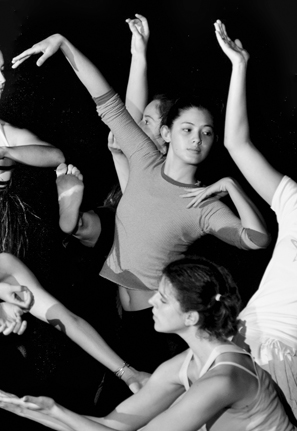 The American Dance Festival (ADF) is a six-week summer gathering of dance students, choreographers, and dance professionals of emerging and legendary status who work together in an exchange of dance craft, creativity, and experimentation, giving North Carolinians the opportunity to see important dance companies and innovators in a number that exceeds what is available in most larger metropolitan areas. The mission of the ADF is to promote all forms of modern dance, both classic and new. What became the ADF began in 1934 in Bennington, Vt., when Martha Hill invited modern dance choreographers Martha Graham, Doris Humphrey, Charles Weidman, and Hanya Holm to teach and choreograph new works at the School of Dance of Bennington College. Since that time the ADF's prestigious list of faculty and premiered masterworks has continued to grow and is unrivaled in the history of dance. The festival moved to Duke University in Durham in 1978.

The ADF sponsors technique classes in dance forms and choreography; presents emerging and established dance companies in public performances; and sponsors workshops for dance teachers, critics, videographers, and movement therapists. In the 1980s the ADF began to move beyond the boundaries of America by presenting modern dance companies and artists from other countries, sponsoring the International Choreographers Residential Program, and holding "miniature" ADF programs in Japan, Korea, and Russia. In addition, the ADF started collaborative programs with existing dance institutions in China, South America, Africa, Poland, the Philippines, and other regions of the world.

The ADF's Black Tradition in American Modern Dance Project began in 1987 to preserve works created by African American choreographers. More than 20 such works have been reconstructed by leading American companies and presented in concert throughout the United States. The ADF Archival Project documents and preserves the performances and special events of the festival and provides access to these archives, which date back to the 1930s. The ADF video collection is housed in Lilly Library at Duke University, and the ADF continues to add to this collection by videotaping performances and interviews with choreographers. The ADF also has issued a series of publications.