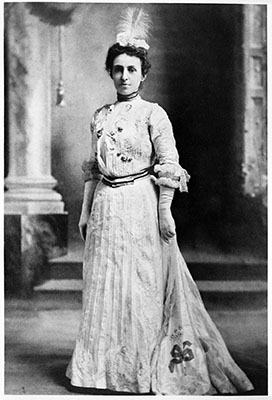 Just as first ladies before her had discovered, Cora Aycock in 1901 found that the governor's annual salary of three thousand dollars was inadequate to cover frivolous or elaborate entertaining at the Executive Mansion; and just as former first ladies had managed, so too did Cora Aycock. (Indeed, the family, being of modest means, left office in debt, in part because of personal expenses associated with being governor.) Cora Aycock skillfully hosted the small dinners for friends and colleagues that her husband, Governor Charles Brantley Aycock, pre­ferred. Both of them relished simple entertaining and did not undertake many large events at the mansion. Many children were entertained there, however, as the Aycocks' many children often invited their friends to visit. Cora Aycock also encouraged her husband's interest in edu­cation and in her later years saw the fruits of his labors ripen as he was accorded the title of North Carolina's education governor.

After the Aycocks left office, they moved back to Goldsboro, where they had resided before moving to Raleigh. In 1910 the family moved back to Raleigh. Charles B. Aycock died suddenly on April 4, 1912, while delivering an address before the Alabama Education Association in Birmingham. Left with almost no estate and eight children, the spunky former first lady took matters in hand. At their Raleigh home, located on a one-acre tract, she raised a variety of vegetables and kept chickens and a cow. She taught her children to be thrifty and allowed them to sell any extra milk or vegetables. She inherited from her parents a farm in Wilson County adjacent to that of a brother-in-law, who oversaw its operation. From that farm her family received a modest income from the sale of tobacco and was provided ham and sausage. Cora Aycock helped to support her family by publishing and selling The Life and Speeches of Charles B. Aycock, which was edited by historian R. D.  W. Connor and her son-in-law Clarence Poe. Later in her life, Cora Aycock,  never very interested in politics, was appointed president of the North Carolina Railroad Company by then governor J. C. B. Ehringhaus.

Born October 11, 1868, to Elder William and Delpha Rountree Woodard of Wilson, Cora Woodard Aycock was the daughter of a Primitive Baptist lay preacher and farmer. She was educated at Wilson Collegiate Institute and attended Mary Baldwin College in Staunton, Virginia. Following a long illness, Cora Aycock died on March 13, 1952, and was buried beside her husband in Raleigh's Oakwood Cemetery.