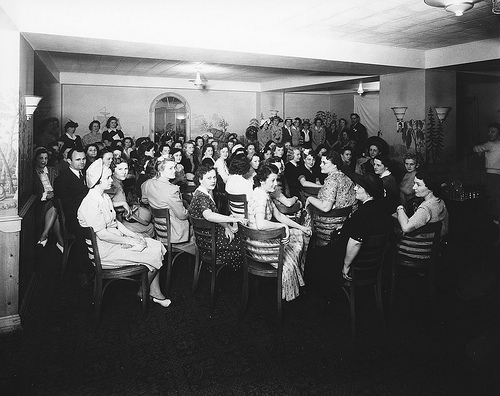 Beauty shops, or beauty parlors, have had a notable impact on the lives of North Carolina women since the early twentieth century. Cosmetologists delivered more than better looks; they became confidantes and comforters, offering a listening ear and a healing touch while at the same time enhancing the personal image of their customers. Beauty shops emerged in North Carolina just after 1900, although professional beauty care was available in the state at least as early as the 1880s. For instance, Samuel Fowler, a barber and hairdresser in Hendersonville, placed an ad in an 1885 promotional brochure. Advertisements from an 1884 newspaper indicate that Mrs. L. Quonts of Concord and Wilson & Burwell of Charlotte were available to do hair work and hair dyeing. It is not clear whether they were itinerant operators, going from house to house, or whether they offered beauty services in their own home "parlors." What is known is that at this time and all over the nation, women's beauty regimens moved out of the privacy of their homes and into the beauty parlors of hairdressers.

During the 1920s, home beauty shops appeared in significant numbers in response to social changes that came in the wake of World War I. In 1919 Congress gave women the right to vote at about the same time that the automobile gave them greater mobility. Further, as the Victorian disdain for makeup and revealing clothing dissipated, women exercised their new freedoms by shortening their skirts, cutting their hair, and painting their faces. Short hair created a demand for professional coiffing.

By the late 1920s and early 1930s, beauty services began to move into commercial space in downtown areas, becoming known as beauty shops or "salons." This move was due primarily to advances in hairdressing technology, particularly after the hot-blast hair dryer was invented in 1892, the marcel curling iron in 1897, and the permanent wave machine in 1905. Because of the hazards of working with sharp instruments, electrical appliances, and chemicals, the industry and state governments recognized the need for regulation. In North Carolina, a State Board of Barber Examiners was established in 1929. Women's beauty shops became regulated in 1933 when a Board of Cosmetology, originally made up of three experienced cosmetologists, was created to grant licenses to beauty schools, individual cosmetologists, apprentices, manicurists, instructors, salons, and shops.

In towns of all sizes, even during the era of the Depression, beauty shops were fixed elements in the lives of women in North Carolina and all over America. By 1939 U.S. Department of Commerce figures showed 87,270 salons across the nation, with a payroll of $81 million. In High Point, for example, a population of about 37,000 in 1935 had at least eight beauty shops, advertising permanents for one dollar and up and shampoo and finger waves for 50 cents. One beauty school offered classes day and night.

After World War II, the beauty business embraced the fashion industry, and together they campaigned to encourage American women to be more style-conscious and to pursue professional beauty care. With an increasing number of women working outside the home and lacking the time to take care of their hair themselves, professional beauty services were more in demand than ever. One factory in North Carolina even added a beauty parlor in 1967 to serve its 500 female employees, hoping to reduce absenteeism.

Increased automobile ownership allowed beauty shops to drift away from downtown locations to outlying strip malls during the decades following World War II. During the 1960s, social change once again brought benefits to the beauty industry. Barbers lacked the know-how and inclination to deal with the longer hair being worn by men. Moreover, they found that the time it took to groom long hair was not cost-effective. The result was that men began going to women's beauty shops to get their hair cut. Ultimately, beauty shops embraced barbering and became unisex, soon catering to the specific needs of virtually all groups.

The 1960s and 1970s ushered in an era of new style consciousness for American women. A wide range of hairstyles was available, many of them bearing the names of the female celebrities who first wore them. Many beauty shops began to move to indoor malls. Customers chose from a range of services that might include not only cuts, roller-sets, and hair texturing (curling or relaxing) but also hair coloring, hair extensions, manicures, artificial nails, facials, and even tanning. The stressful lives of women trying to manage both careers and families also created a market for the full-service day spa, specializing in "client pampering."

By the end of the twentieth century and the early years of the twenty-first, the ownership and management of beauty shops had changed. With the exception of the chains, which still earned a percentage of each operator's business, almost all shops went to the booth rental system, with operators establishing their own fees and paying for their own supplies, turning cosmetologists into entrepreneurs. A large percentage of North Carolina's beauty shops were also one-chair operations, often in rural settings. Women with training in cosmetology who wanted to stay at home and continue working set up beauty shops by adapting their homes to accommodate a business, much as women did in the early decades of the century.