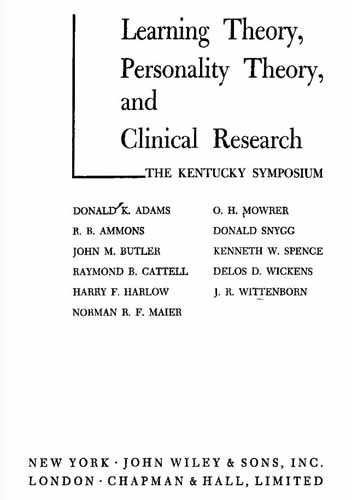 Donald Keith Adams, educator and psychologist, was born in Orville, Ohio, the son of John F. and Elizabeth Taylor Adams. His preparatory education was completed at the local high school in 1919, and he entered Pennsylvania State University, University Park, that fall. He was graduated with a B.A. in 1923. The next year he taught in the high school at Donora, Pa., and then went to Harvard University, where he earned the M.A. degree in 1925. From Harvard he went to Yale University for two subsequent years, receiving the degree of Ph.D. there in 1927 in psychology, with a special emphasis in social psychology.

The following year he was a Sterling Fellow at Yale, after which he joined the faculty of Wesleyan University, Middletown, Conn. In 1929 he taught at Iowa State University, Ames, and then spent two years as a Fellow of the National Research Council in Berlin, Germany. When he returned to the United States in 1931, he accepted an invitation to join the faculty of Duke University as professor of psychology, a post he held until his retirement in 1967.

For three successive summers he taught special classes, first at the University of California, Berkeley, in 1948; then at Cornell University, Ithaca, N. Y., in 1949 and the following summer at Salzburg, Austria, where he conducted a seminar in American Studies. As at Duke, he proved a popular and stimulating teacher in those special assignments and commanded great respect in his field around the world.

He used his several sabbaticals from his work at Duke for special teaching, research, and writing. With a Guggenheim Fellowship, he spent 1937–38 divided between lecturing and studying at Geneva, Switzerland, and lecturing at Swarthmore College, Swarthmore, Pa. During another session, 1958–59, he held a Fulbright Scholarship at the Max-Planck-Institut, Seewiesen/Starnberg.

On military leave from Duke, Adams spent 1943–45 in Washington, London, Paris, and Wiesbaden in assessment research for the Office of Strategic Services. The following year he was sent to Japan with the United States Strategic Bombing Service, and then, from 1946 to 1948, he was chief psychologist in the Veterans Administration in Atlanta and Richmond. He returned to Duke and served as chairman of the Department of Psychology from 1947 to 1951.

Adams's scholarly writings included: Experimental Studies of Adaptive Behavior (Baltimore, 1929); the translation, with K. E. Zener, of K. Levin's Dynamic Theory of Personality (New York, 1935); The Anatomy of Personality (New York, 1954); and Learning Theory, Personality Theory and Clinical Research (New York, 1954). In addition he contributed many articles to a long list of academic and professional journals. Among these was his classic "Restatement of the Problem of Learning," published in the British Journal of Psychology (1932).

Adams's teaching, lecturing, and writing covered a broad spectrum of interests. He was a recognized authority on animal behavior and comparative psychology, but throughout his career at Duke, his scholarly interests ranged further, into the fields of development, personality, and social psychology.