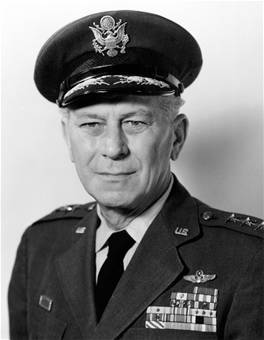 Frank Alton Armstrong, Jr., air force officer, was born in Hamilton, the son of Frank Alton and Annie Elizabeth Hobbs Armstrong. Upon the completion of high school and preparatory school, Armstrong entered Wake Forest College, where he played varsity football and baseball for five years. He received the LL.B. degree in 1922 and the B.S. degree in 1925. Following graduation, he played professional baseball for a Sarasota, Fla., minor league team before enlisting as a flying cadet with the U.S. Army in 1928.

Following cadet training at Brooks Field, Tex., Armstrong was commissioned a second lieutenant in the U.S. Army Air Corps. Between 1930 and 1934 he served as a flying instructor at various air bases in the United States and in 1934 was assigned to air mail duty, flying domestic mail between Burbank, Calif., and Las Vegas, Nev. From 1935 to 1938 he was stationed in the Panama Canal Zone, with pursuit and observation squadrons operating out of Albrook Field.

After returning to the United States, Armstrong assumed command of the Thirteenth Bombardment Squadron. In October 1940 he was selected to visit England as an American military observer. During his three months in war-torn London, Armstrong witnessed the German blitz bombing of England and marveled at the determination of the British people. His observations and reports became vital for planning American air operations in Europe once the United States entered World War II late in 1941. By February of 1942, he was back in England as Operations Officer for the U.S. Army Air Corps Bomber Command. As lieutenant colonel and then as colonel, Armstrong served as bombardment group commander, wing commander, and ultimately division commander of the Eighth Bomber Command. On 17 Aug. 1942, Armstrong led the first U.S. daylight bombing raid over enemy territory, striking targets at Rouen-Cotteville, France. In December 1942 he was promoted to brigadier general and given command of the 306th Heavy Bombardment Group. On 27 Jan. 1943 he commanded the first U.S. heavy bombing raid over Germany, which bombed Wilhelmshaven. Armstrong's experiences in Europe during this period became the basis for the successful book and motion picture Twelve O'Clock High. 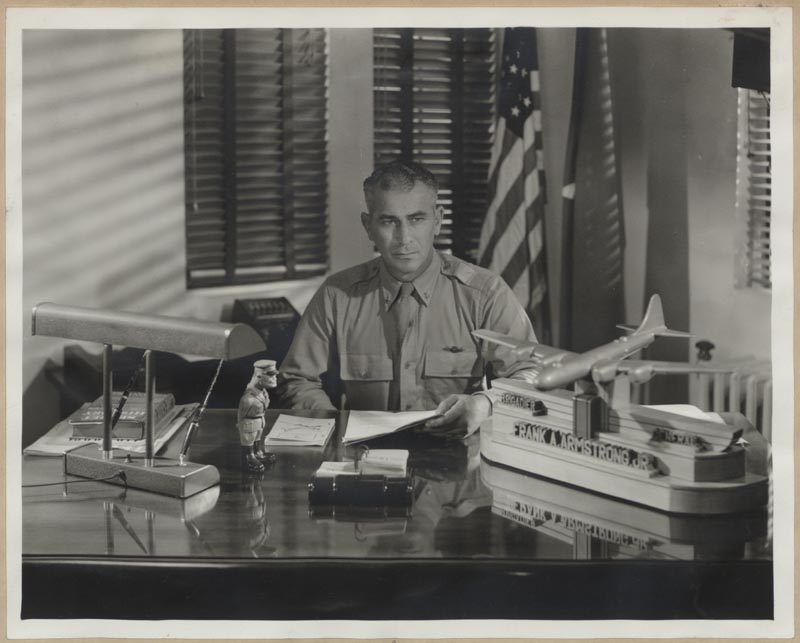 After returning to the United States in August 1943, he commanded Air Corps training at Colorado Springs, Colo., and became commanding general of the 315th Bombardment Wing (Very Heavy). The 315th, which was to see action in the Pacific Theater of Operations, was provided with the new B-29 bomber, rather than the B-17 Flying Fortress bombers used against Germany. The planes were equipped with a new "Eagle" airborne radar for precision night bombing, and all guns except the tail guns had been removed to permit heavier bomb loads. The 315th was transferred to Guam during May 1945, and for three months it devastated Japanese petroleum refineries and storage centers. On 15 Aug. 1945 Armstrong commanded the longest and last nonstop combat flight of World War II, flying round trip from Guam to Honshu, Japan. When the war ended, Armstrong flew the first nonstop flight from Japan (Hokkaido) to Washington, D.C.

After spending 1946 as chief of staff for Operations of the Pacific Air Command, Armstrong returned to the United States as senior air advisor at the Armed Forces Staff College, Norfolk, Va. In May 1948 he was ordered to Alaska as chief of staff of the Alaskan Air Command. While in Alaska, in September 1949, Armstrong and other members of the Air Command pioneered an air route from Alaska across the North Pole to Norway and from Norway to New York. 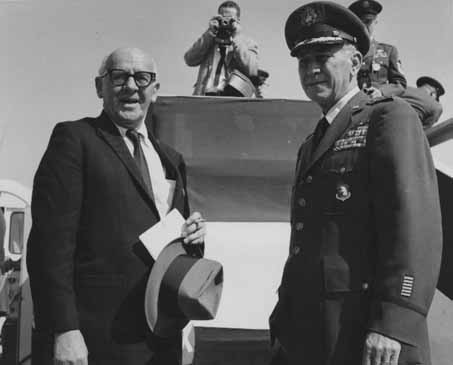 fter returning to the mainland in 1950, Armstrong was promoted to major general. He became a part of the Strategic Air Command at McDill Air Force Base, and in October 1952 he took command of the Second Air Force at Barksdale Air Force Base, La. In July 1956 he returned to Alaska to head the Alaskan Air Command, becoming two months later commander in chief, Alaska, with the rank of lieutenant general. Armstrong was deeply disturbed over the inadequate defense of Alaska. On numerous occasions he urged the deployment of intermediate range ballistic missles (IRBMs) in Alaska as a vital link in the American defense system. His contention that Alaska was a logical debarkation point for a Russian attack upon the United States failed to rally support from a Cold War administration married to the "Fortress America" concept of defense. On several occasions his views brought him in sharp conflict with the chairman of the Joint Chiefs of Staff and the secretary of defense. Armstrong retired from the air force in July 1961 after thirty-three years of service.

Among the many decorations Armstrong received for his services were the Distinguished Flying Cross with four Oak Leaf Clusters; the Distinguished Service Medal with Oak Leaf Cluster; the Silver Star; the British Distinguished Flying Cross (first British air medal awarded to a U.S. airman during World War II); the Gold Medal of the Aero Club of Norway (the highest civil award of Norway); Belgium's Croix de Guerre with palm; and the U.S. Conservation Service Award for leadership in wildlife conservation in Alaska.

In 1929, Armstrong married Vernelle Lloyd (Fluffy) Hudson of Richmond, Va., who died in February 1962. He married again; his second wife, Mrs. Peggy Jenison Lippe, died in April 1973. Armstrong's only son, Major Frank A. Armstrong, III, was killed in action over Vietnam in 1967.

General Armstrong died at his home in Tampa, Fla., and was buried in Arlington Cemetery.

Biographies of Frank Alton Armstrong, Jr. from the Official Website of the U.S. Air Force: http://www.af.mil/AboutUs/Biographies/Display/tabid/225/Article/107785/lieutenant-general-frank-alton-armstrong-jr.aspx

Biographies of Frank Alton Armstrong, Jr. from the Official Website of the U.S. Air Force: http://www.af.mil/AboutUs/Biographies/Display/tabid/225/Article/107785/lieutenant-general-frank-alton-armstrong-jr.aspx (accessed May 7, 2014).

General Frank A. Armstrong, Jr. and an unidentified man standing together during Eisenhower's visit to Elmendorf Air Force Base in Anchorage, Alaska. Photographer and other military officers behind them. 1960. From East Carolina Digital Collections, call #: 35.8.b.34. Available from http://digital.lib.ecu.edu/11328#details (accessed January 18, 2013).