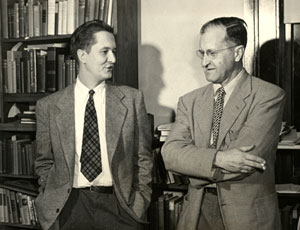 William Maxwell Blackburn, educator, son of Charles Stanley and Amy Malvina Waring Blackburn, Presbyterian missionaries, was born in Urumiah, Iran, and died in Durham. His paternal grandfather was a church historian and university president in the Dakota Territory; his mother's family in Columbia, S.C., could claim descent from John Howland of the Mayflower. When five years old, Blackburn came with his parents to South Carolina; the family moved from town to town, living off the meager rewards of the ministerial vocation. The memory of those hard times was to haunt Blackburn all his life, yet in a short, posthumously published memoir, he wrote with lively warmth of his boyhood in Seneca, S.C., and of the shaping influence on a poor preacher's son of his grandmother, Malvina Gist Waring, a novelist and "old reb" who had served the Confederacy. It was she who encouraged his literary interests and in 1917 sent him to Furman University, where he was graduated in 1921 with an A.B. in English. There followed a University Scholarship in the graduate school at Yale and a year's teaching at Carnegie Institute of Technology, and then came recognition of his learning and strength of character: he was awarded a Rhodes Scholarship from South Carolina. The years at Hertford College, Oxford University, 1923–26, were among the happiest of his life, leading to B.A. and M.A. degrees and, perhaps of greater importance, confirming his sense of a mission as a humanist educator. At Oxford, too, it is not unreasonable to speculate, the passionate ethical idealism, the "sweet reasonableness" of Matthew Arnold, left their strong impression; certainly the immense learning that produced pioneering studies of Literature and Dogma (subject of Blackburn's Yale Ph.D. dissertation in 1943) was partly a debt paid to Arnold, a kindred spirit.

In 1926, Blackburn was drawn to Duke in that new university's massive effort to assemble a strong faculty for an "Oxford of the South." Here he was to teach English for forty-five years, with the exception of a period with University Training Command, Florence, Italy, in 1945. Throughout the Duke years, he remained professionally active in associations of college English teachers and of Rhodes Scholars. He became a full professor in 1953. In May 1966 he first served as an adviser to the National Endowment for the Arts.

As an author, Blackburn placed his own considerable literary talents, known to his friends and family through the terse, diffident, avuncular letters he wrote them, at the service of other writers, as their editor. After Arnold studies and a booklet, The Architecture of Duke University (1938), he edited three successive volumes of narrative and verse by Duke students, many his own and some, thus initially encouraged, on their way to literary fame. In 1969 appeared Love, Boy, poignant letters from one of those former students, Mac Hyman, revealing how tormented by self-doubt had been the humorist who wrote No Time for Sergeants. Earlier, in 1958, Blackburn's ingenious discovery and penetration of the materials published as Joseph Conrad: Letters to William Blackwood and David S. Meldrum had earned international critical acclaim, not least because, from their editing, the letters take on narrative form and show the heroism of Conrad's early struggle for recognition as an artist.

With imaginative power and a gift of sympathetic insight, Blackburn was able to grasp the essential design of a literary work as it surfaces from the creative process. This grasp of design was crucial to his success as a teacher of writers at Duke and, from 1969 until his death, at The University of North Carolina. When the London Times Literary Supplement editorialized in 1965 about the teaching of creative writing, Blackburn was hailed as the rare teacher possessing "the combination of critical acumen and charisma" feasible for the job. He himself, however, persistently refused to take credit for the successes of such former students as Pulitzer Prize winning novelist William Styron; even when featured on national television, Blackburn characteristically turned attention away from himself and onto his famous students. His modest claim was that he helped writers to become good readers. Yet no history of forces shaping modern letters in the south will be complete without notice of the influence of this quietly eloquent, plainly devoted teacher—a large man of noble bearing and mien, one whose unifying human qualities of courage, humor, and moral integrity helped to guide and inspire makers of literature. His marriage on 28 Dec. 1926 to Elizabeth Cheney Bayne of South Manchester, Conn., ended in divorce in 1951; in July 1966 he married Roma Stewart Goodwin of Montreal. His children are Mary April (Mrs. Robert M. Hill) and Alexander Lambert.